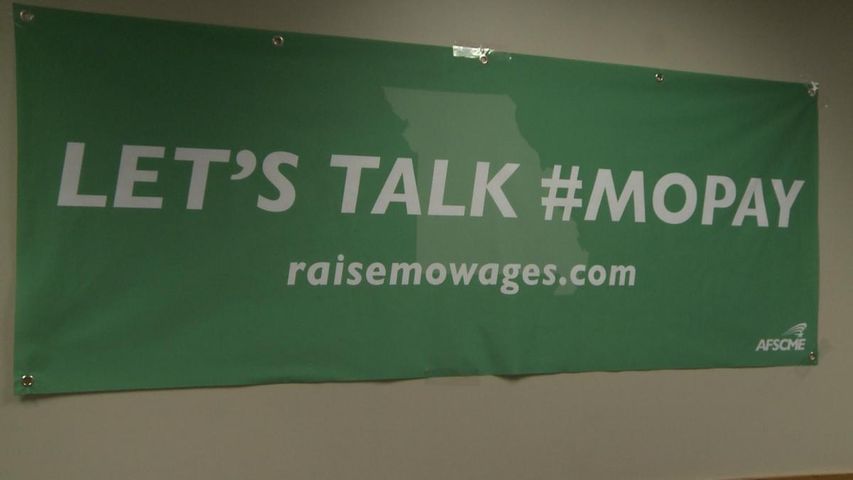 JEFFERSON CITY - Wendy Battaglia works at the Missouri Veteran's Home in Cameron as a certified nursing assistant. She's worked there since 2007 but her wage hasn't increased much at all.

Battaglia is a mother to three young girls who all have an interest in playing sports and being active kids.

"It's tough. I struggle every single day to figure out what bill I'm going to pay, when I'm going to have to call them and say, hey I'm going to be late," Battaglia said. "It's really straining. My girls see that its really tough for me and they want to step away from sports they do because they know it costs money and I won't let them do that."

Jeff Mazur, executive director of American Federation of State, Count and Municipal Employees (AFSCME), said Missouri state workers are last in the country in pay. He said the quality of work is going down because of the low pay.

According to the most recent data from the Bureau of Labor Statistics at the U.S. Department of Labor, Missouri's average annual state worker pay is $39,993.

That puts Missouri last among all states, even though the cost of living is 34th highest in the county.

"It becomes very hard to provide quality state services when you can't hire good people because they're going to take other jobs that pay more," Mazur said.

There was a 17 percent rate of turnover for state employees in 2014.

Battaglia has seen it firsthand.

"We're losing really good staff because they can't afford it," Battaglia said. "I have a lot of nursing staff getting second jobs like I have to and it's stressful and it's hard and we have a very hard job."

Rep. Kevin Engler (R-Farmington), said Missouri's state workers are some of the lowest paid workers in the country and he said he agrees that the state is suffering overall from the low pay.

"We're losing good people. We have turnover and it's just fair that we have to pay someone a living wage," Engler said.

Engler said state representatives and senators that represent large groups of state workers need to step up and get the raise.

"We have to make it a priority. We need to give the employees a pay raise," Engler said.

Battaglia said an increase in pay would mean she doesn't have to get a second job.

"It would help us substantially. I could spend time with kids rather than having to get a second job. I wouldn't have to worry about what bill I'm going to pay and robbing Peter to pay Paul. No one should have to go through that, especially not a state worker."