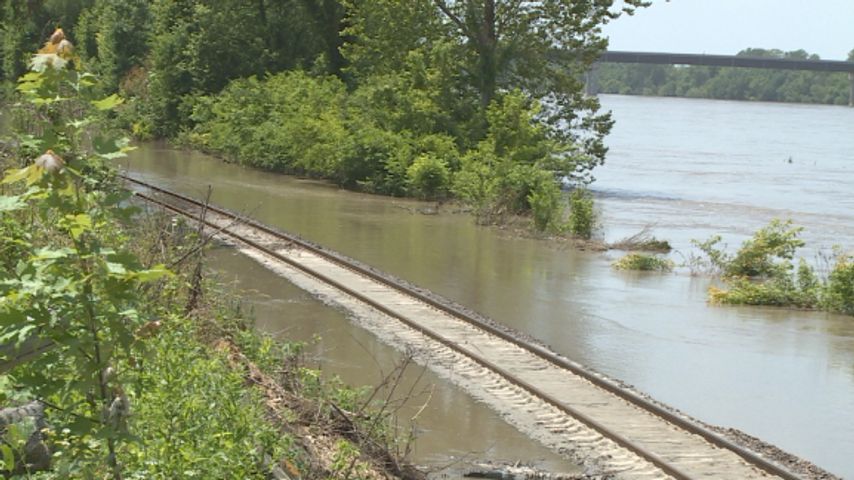 BOONVILLE - The Missouri River in Boonville is predicted to fall into minor flood stage beginning Friday and into the weekend according to the National Weather Service.

The most recent crest has been almost 31 feet. Once the level falls below 30 feet The Missouri-Pacific railroad tracks on the south side of the river will be clear of water.

Ilene Vanabbema, one homeowner in Boonville along the river, described the scene behind her house she usually sees. The beautiful Missouri River flowing along the trees and two sets of railroad tracks. Now only the very top of the trees are visible and only parts of one track.

"Normally its back down a little ledge behind the trees so it's still pretty high up," she said.

Vanabbema said crews were out fixing the track after the river fell before and thinks they weren't expecting it to rise this much again.

"The trains were running for about four days but then stopped," she said.

A predicted fall in water level is to Vanabbema, but she worries about the lack of levees when weather does hit.

"I think theres no rain for a week so it should drop but I don't know what that means if anymore rain comes this way it may come back up again" she said.

When asked what the community feeling has been about the water, Vanabbema said its been a lot.

"People are sick of it. Very sick of it. People just want to get on with their lives." She said the rising and falling is getting to them. "I think the roads to new Franklin were open for a couple days but once people get used to it they have to close them again."

According to the KOMU 8 Weather Team, if rain holds off, the level should continue to fall.