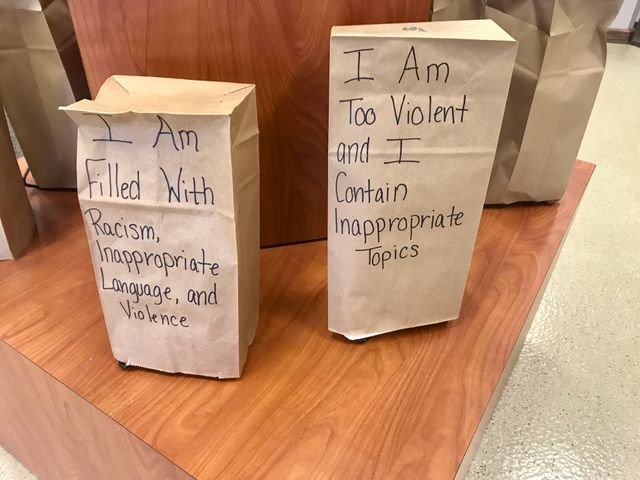 Banned Book Week is an annual celebration of the freedom to read that is part of the American Library Association.

The week is used to raise awareness for peoples’ rights to choose what they want to read. Many librarians, teachers and students from all across the country take part in activities and events throughout the week.

“As a public library it’s our duty to make available a very diverse array of materials and some of them might not please everyone. But we aren’t doing our job if we are only collecting books that please everybody,” said Missouri Regional River Library’s Teen Service Coordinator Courtney Waters.

Some of the 2016 books include Two Boys Kissing by David Levithan and This One Summer by Mariko Tamaki. The Hunger Games was also challenged.

The Missouri River Regional Library places paper bags over the books that have been challenged. Written on the bags are the reasons the individual book was challenged. One read, “I am filled with racism, inappropriate language and violence.”

To challenge a book, most libraries have a form that people can fill out to express their concerns or thoughts about why a book should be banned.

“The books that are geared towards children and teens are the ones I find really concerning. Most of them deal with LGBT content. Those tend to be the most challenged books across the country and I find that really troubling,” Waters said.

However, she said that many times nothing ends up happening with challenges.

Bans are also rare. They are only officially banned when physically removed from the shelves and when there is no access to them in a library.

According to the banned books week website, “The Coalition seeks to engage various communities and inspire participation in Banned Books Week through education, advocacy, and the creation of programming about the problem of book censorship.”

Banned Book Week began in 1982 in response to an increase in book challenges in schools, libraries and bookstores.

Waters said the week is important. “We want people to understand that we support their freedom to read and we support a diverse collection, and that we want to find materials for every reader,” Waters said.

“I personally think it’s important because it reveals a lot of biases in our culture, particularly with the content that is traditionally banned,” she said. “It is almost entirely based on sexuality or identity and those, I think, are really important topics, especially for youth.”

Many other libraries are celebrating the week, including Columbia’s Little Library Under the Trees. The nation-wide event will end on Sept. 30.