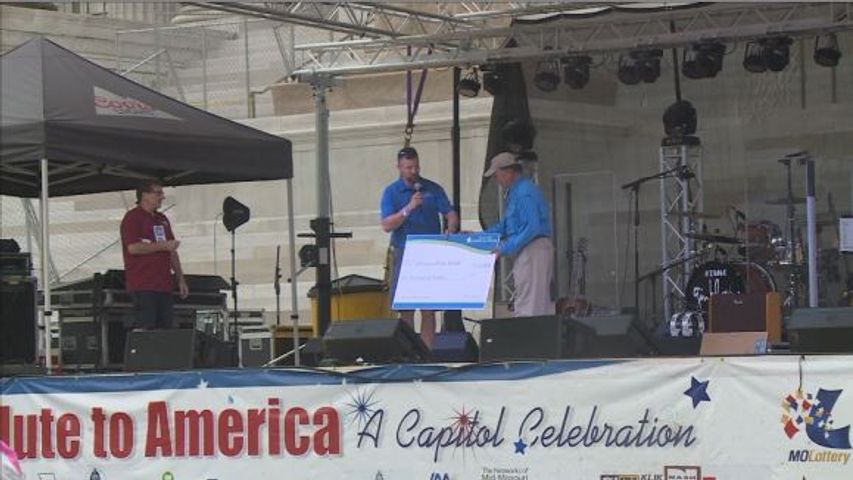 JEFFERSON CITY - Missouri American Water presented Missouri River Relief with a $10,000 environmental grant Tuesday at the Jefferson City Salute to America Celebration. The grant is for a cleanup project on the Missouri River.

Brent Haas, the Jefferson City operations manager of Missouri American Water presented the check to Missouri River Relief Director Jeff Barrow at the main stage.  Missouri River Relief is a nonprofit organization that hosts cleanups of rivers around the state and works to educate the public on preservation and pollution issues.

“Being a nonprofit organization, they do a lot of work that really made them a deserving entity,” Haas said.

Communities in Missouri are still recovering from the effects of flooding in April and May of this year. As of June 28, the Federal Emergency Management Agency approved nearly $10 million in assistance to flooding survivors in the state.

After recent flooding, Barrow said, “it’s especially important for us to get out there and clean the river.”

Due to the high amount of applicants, FEMA extended the date local governments and nonprofit organizations can apply for federal aid to July 14.

Residents who were displaced from work due to flooding have until July 5 to apply for Disaster Unemployment Assistance through the Missouri Department of Labor and Industrial Relations.

State agencies are also helping with recovery. According to MODoT, the Missouri Highway and Transportation Commission recently approved recovery bids for areas in south Missouri.

Flooding in April and May prompted Governor Greitens to declare a state of emergency. In June, President Trump approved Greitens’ request to declare it a major disaster.

The president’s declaration makes more Missouri counties eligible for federal aid, and according to the IRS, taxpayers living in affected counties may qualify for tax relief.

There are still five disaster recovery centers open in Missouri.

Missouri River Relief hosts many cleanup projects during the year.