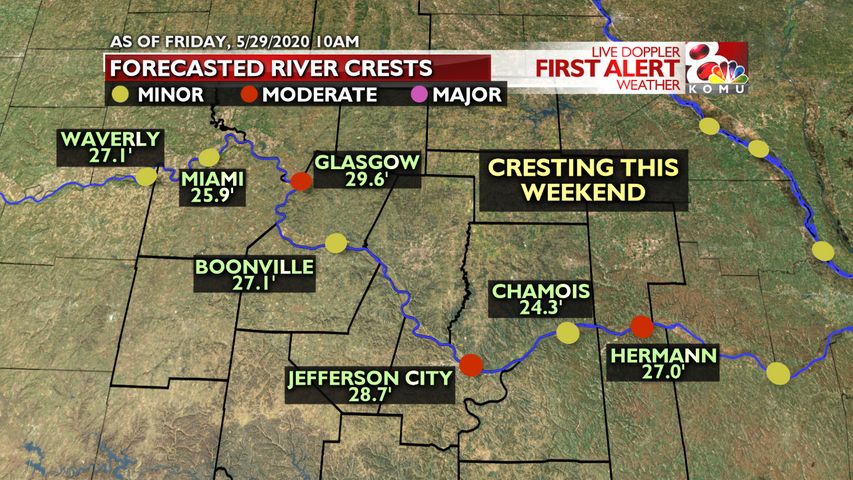 COLUMBIA - The Missouri River is expected to reach moderate flood stage in Jefferson City, Glasgow and Hermann this weekend. The rise in river levels is due above average rainfall over the Missouri River Basin over the last several days and this will result in flooding for parts of the Katy Trail.

Friday Midday Update: The Missouri River is on this rise across much of the region. Currently most of our river gauges are in Minor Flood Stage. Glasgow is in Moderate Flood Stage pic.twitter.com/PpnzVDCzIa

River Crest Forecast: The Missouri River is expected to crest at Moderate Flood Stage this weekend through early next week for a few locations. These values are all well below the flooding we saw in 2019. #MidMoWx #MidMo #MoWx #MissouriRiver pic.twitter.com/qOZLP7gycj

Moderate Flood Stage for Glasgow is defined as 27’  and the river is expected to crest Saturday, May 30th in the morning at 29.6’. River levels will then start falling and are expected to be back below moderate flood stage on Monday and below minor flood stage (25’) on Tuesday. Potential impacts of this expected flooding include flooding of Farmland along the Missouri River and the overtopping of Agricultural Levees.

The river is expected to start receding and should fall below minor flood stage (25’) Tuesday into Wednesday June 2-3, 2020.

River levels are expected to rise near Hermann as well, reaching Moderate Flood stage (26’) Saturday. A crest of 27’ is expected to occur Sunday May 31st into Monday June 1st. This could cause flooding of the Katy trail near Portland and flooding could begin on Gutenberg street.

River levels will start falling Monday and should be around minor flood stage by Wednesday June 3rd.

The Live Doppler 8 First Alert Weather Team gave the First Alert to the potential for spring flooding in their Spring Flood Outlook.