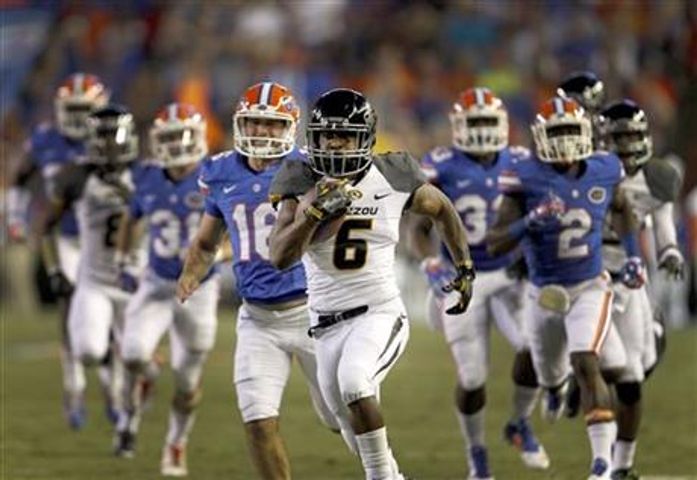 The Tigers (5-2, 2-1 Southeastern Conference) scored on a kickoff return, a punt return, a fumble return and an interception return. They managed just seven first downs and 119 yards of offense, including 20 passing, and essentially let the Gators self-destruct in nearly every way imaginable.

Mizzou bounced back from a shutout loss at home to Georgia, remained in the hunt in the muddled Eastern Division and extended their road winning streak to eight.

The Gators (3-3, 2-3) lost for the second time in eight days, fueling speculation that Will Muschamp has coached his final game in Gainesville. "Fire Muschamp" chants broke out in third quarter and could be heard throughout an emptying Florida Field.

Florida has dropped 12 of its last 19 games and trails the division-leading Bulldogs by two games with three remaining.

Athletic director Jeremy Foley said in September that he wouldn't make any decisions about Muschamp's future until after the season finale. But he also has said repeatedly over the years that if something must be done eventually, it must be done immediately.

The Gators could be 0-5 in conference play. They eked by Kentucky in triple overtime and edged Tennessee 10-9 two weeks ago. Their latest setback was their worst home loss since falling 37-7 to rival Florida State last season.

So questions surrounding Muschamp have lingered and may have reached an apex Saturday. Missouri led 20-0 at halftime despite gaining just 99 yards, and Florida looked like it had no idea how it wanted to use a two-quarterback system featuring Jeff Driskel and Treon Harris.

With a bye week on tap and Georgia up after that, few would be surprised to see Foley make the move by Sunday. Then again, there doesn't seem to be a number of strong candidates out there for the choosing.

Missouri, meanwhile, will surely be able to enjoy the next few days. The Tigers were miserable last week after a 34-0 loss to Georgia. Now, they finish league play with a seemingly soft stretch against Vanderbilt, Kentucky, Texas A&M, Tennessee and Arkansas.

Of course, Mizzou has little chance of getting anyone else to collapse like Florida did.

Murphy returned the opening kickoff 96 yards for a touchdown and added a 5-yard scoring run later in the first - after one of Florida's six turnovers.

Driskel fumbled on Florida's first series and threw an interception in the second quarter that led to a field goal. He also had a fumble returned 21 yards for a touchdown by Markus Golden and an interception returned 46 yards for a score by Darvin Ruise - both in Missouri's 22-point third quarter.

Harris, a freshman who played for the first time since a female student withdrew a sexual assault complaint that kept him off the field last week against LSU, fumbled on his first drive and threw an interception in the fourth.

He finished 8-of-12 passing for 98 yards, including a 5-yard touchdown pass to Tevin Westbrook late in the third. Harris threw the ball up for grabs to avoid a sack, and Westbrook came down with it in a crowded end zone. He also scored from 3 yards out in the final minute.

Driskel completed 7 of 19 passes for 50 yards, with two fumbles and two interceptions. He also was sacked four times. He now has 12 turnovers in the last four games.

Maty Mauk was 6-of-18 passing for 20 yards, with an interception, and added 38 yards on the ground.