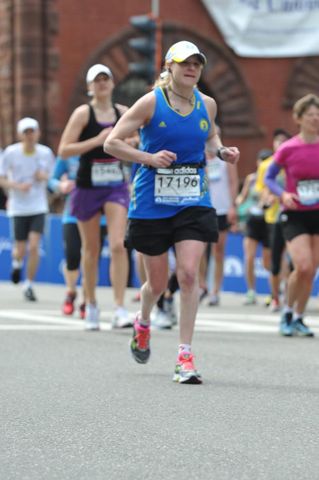 COLUMBIA - Life can be shaky, even unexpected. One moment Shelly Frazier was running the Boston Marathon.

"You know I finally got to the end, crossed the finish line and I thought, 'I finished, it's done, fantastic,'" said Frazier.

The next moment, tragedy.

"And then I was walking through the finisher's shoot and got just to the very end and just happened to turn back around for some food and heard the explosions and saw the smoke go up in the air, couldn't really see what was going on on the ground," Frazier said.

It took awhile to sink in.

"The furthest thing from our mind was that this was some kind of terrorist attack or whatever. Why would you think? You would never think that," said Frazier. "We were hoping maybe it was an electrical explosion or something like that and not too long later the second one went off and i think everybody at that point pretty much knew that there was something bad going on."

The terrorist attacks left three dead and left than 200 wounded.

"My immediate family was extremely concerned, and I had about 100 texts and voice messages on my phone by the time we actually had communication with the outside world. People just asking what was going on. I was able to communicate quickly enough with people to let them know that I was ok," said Frazier.

It wasn't the blast, but racing itself that punished her body. Whether it's her knee, her ankle, or her Achilles, injuries have taken a toll on Shelly's running career, and she always knew this would be her last marathon.

"It's been kind of a long mental journey to accept that my run performances declined over the years and I finally have accepted that it's just not really fun to run 26.2 miles physically," Frazier said. "Mentally it's still pretty fun. But it's just not something I'm capable of doing comfortably anymore."

But that doesn't mean she can't compete.  Shelly is a 2011 and 2012 world champion in bench press, and she plans to continue with lifting competitions. But because of Boston, Shelly's still leaving a very small chance that she may run competitively again.

"I feel almost like I'd like to go back and run it again just to prove that the running community is resilient and that something like this won't stop us. I mean, I can't. I'm trying to encourage my friends to go back. I'm not sure exactly that all of them will go up. I'd like to, but I just can't," Frazier said.

The heart is willing. But while the flesh isn't weak, it won't be running competitively.