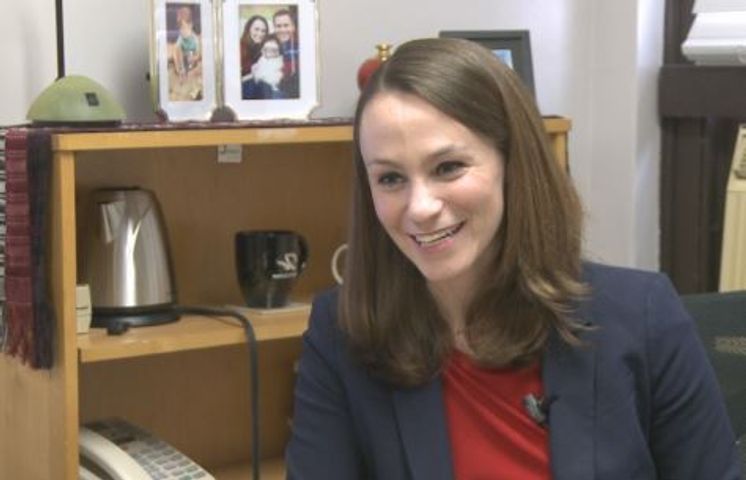 COLUMBIA - Missouri's new first lady, Dr. Sheena Chestnut Greitens, said she is committed to keeping politics separate from her job teaching at the University of Missouri, even though her husband, Gov. Eric Greitens recently decided to cut higher education budgets.

Sheena Greitens is an assistant professor of political science at the University of Missouri.

Sitting down with KOMU 8 News and the Columbia Missourian for an exclusive interview, she pulled back the curtain of privacy around her.

Many may have wondered who exactly is the self-defined mother first, teacher second, and first lady third, and how she juggles it all.

"One day at a time," Greitens said. "I mean, we really, my husband and I really see ourselves as a pretty normal two-parent, two working-parent family, with small kids. And we both love what we do, it's really important to us to do our jobs, to do them well."

For her, the "do" is teaching MU classes on American Wars in Asia and dictatorship and democracy, in addition to carrying out research on East Asia, her area of expertise.

Her role as an educator at a public university has taken on special interest this month following the release of the governor's proposed budget for the fiscal year 2018. It outlines a cut of around $159 million to the state's higher education funding.

"You know, I don't speak for the governor's office. So when it comes to the budget cuts, you know certainly I can see both sides of it. But I won't comment further," Greitens said.

But while hesitant to comment on the state budget, Greitens is quite vocal in sharing what role in the state she will be taking on during the course of the next four years. She plans to advocate for improvements to the state's foster care and adoptive services.

"We have about 12 or 13,000 children in the state of Missouri who the state is legally responsible for and so it's really important that we do a good job with those kids," Greitens said. "And something that, as a mother, as a teacher and now in this new role, I really care about, and so I'm excited to find out from people what we can do to support that system and make it work better."

For now, her plans for advocacy remain undeveloped. With numerous academic projects of her own in the works, her hands are full.

The most notable of these projects is the launch of MU's Institute for Korean Studies with co-director Dr. Harrison Kim earlier this month. The program looks to establish a central hub for those in the MU academic community to come together to study and explore the Korean Peninsula.

Kim and Greitens have worked on the creation of the institute since 2015.

Kim said, "Working with her is efficient, but at the same time makes you think, it's a constant challenge. She asks big questions, but also pays a lot of attention to detail. She's the whole package."

So why the heavy interest in East Asia? According to Greitens, it all began with her sister who was adopted from South Korea when Greitens was in third grade. Greitens said the experience fueled her initial curiosity and eventually lead in her into teaching about the region.

"I was really curious what her life would have been like and just started asking more questions, especially about Korea," Greitens said.

When college came, Greitens found herself with the opportunity to study in South Korea. During the program, her group made a trip to the demilitarized zone, the DMZ, which has separated North and South Korea since an armistice agreement was signed during the Korean War in 1953. It was here, standing at the border lined with Korean and U.S. troops, that the focus of her life work started to become clear.

"I realized if a conflict broke out, that the people on the North Korean side of the DMZ would be shooting at young men and women who were about my age. Many of them are in their early 20's. So I was just really interested in how North Korea had survived when communism in Eastern Europe had crumbled," Greitens said. "I started taking a lot of classes on Korea and on East Asia, learned Chinese and a little bit of Korean and, you know, just decided that I wanted to really do research and try to understand what was going on in East Asia and what that mean't for the U.S. today."

In 2011, shortly after her marriage to the then future-governor, Greitens moved to Missouri. According to Greitens, it was during this time that the political science department at MU was looking for a faculty member who worked on democracy and dictatorship in areas such as East Asia.

When asked whether her role as the first lady of Missourian has been polarizing in any way, be it among her colleagues or students, here's what she had to say.

"I don't think so. I think it's it's been an actually a good experience and a good combination," she said. "One of the things that we have been very careful about from the beginning is to make sure that we keep the roles separate where it's appropriate to do so. And so I make sure that when I'm on campus, my time is really a hundred percent devoted to my role as a professor and a teacher, to my students to my research work, to my obligations to the university."

According to Calvin Sears, a junior political science major in her American Wars in Asia class, Greitens is quite good at teaching.

"She really engages with us and I really like the way that she teaches, her style of teaching," Sears said. "At the the beginning of class, she, we, kind of do a little review of the previous classes' lecture and then we dive into the lecture itself."

According to Sears and Edwards, Greitens has only acknowledged her role outside of the class once.

"Just in the beginning, saying that she doesn't want to get politics, current politics, involved in the class, and just wants to focus on the class itself," Sears said.

Greitens said that was on purpose.

"When I'm on campus, I'm not here as the first lady, I'm here as their professor, and that my role is to teach and do research and that I don't speak for governors office here," she said. "My focus when I'm here is 100% on teaching and research."