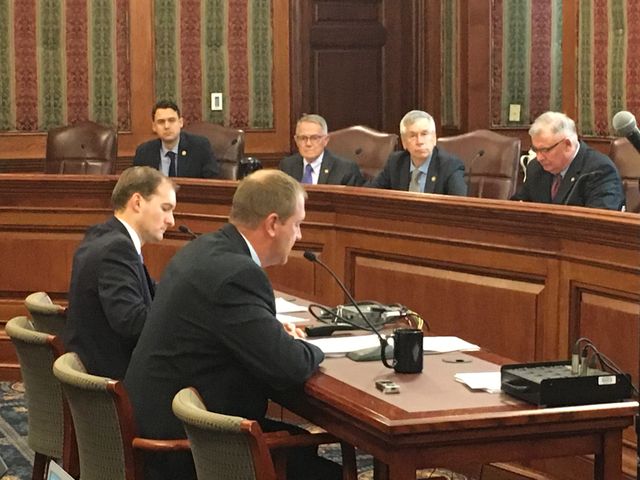 JEFFERSON CITY – Missouri state treasurer Eric Schmitt is calling for the state to restructure what he says is a failing pension system after meeting with the Joint Committee on Public Employee Retirement Wednesday.

Schmitt told the committee the Missouri State Employees’ Retirement System (MOSERS) has a $5.2 billion unfunded liability, which means thousands of dollars of debt for every taxpayer.

“This crisis is no longer on the horizon. It’s on our doorstep,” Schmitt said.

Schmitt said this liability is preventing funds from going toward schools, roads or other public services.

For years, as taxpayers paid into a retirement fund, that money was invested with a projected rate of return of 8 percent. Last year, the actual rate of return was 3.5 percent.

These incorrect estimates have left MOSERS 60 percent funded. A pension system is considered "healthy" with 80 percent or higher funding.

“That means for every dollar we owe future retirees, we only have 60 cents in assets,” Schmitt said.

And it could be even worse. Schmitt says if risk management professionals update their projections with the most current information, the MOSERS funding could be lower than 50 percent.

Actuaries look at how much money is coming into a retirement plan, how much money they expect to make with their investments, and how much they will have to pay out over time.

“It’s all based on assumptions, and if they have the assumptions wrong, the implications can be dramatic especially for the people who will be receiving those pensions,” Schaaf said.

“Whether it was convenient, wrong, rosy, whatever; they were dead wrong,” Schmitt said.

MOSERS has spent millions of dollars in the past years on investment fees, and these fees have been leaving the state and going to Wall Street banks and bankers. Retirement research out of Boston College shows that out of 135 other public pensions in the country, MOSERS ranked seventh highest in investment costs.

“This is unacceptable,” Schmitt said.

MOSERS communication manager Candy Smith said the organization is committed to getting benefits to all its retirees.

"As long as the state continues to provide the money that is necessary to fund the system, we'll continue to pay our retirees 100 percent of the benefits that are due to them," Smith said.

Smith said with a pension system, there's a very "long term time horizon," collecting money to pay benefits 30 to 50 years in the future. Though MOSERS is only 60 percent funded, Smith said there are no immediate consequences.

Schmitt, who will attend a MOSERS board meeting Thursday, plans to work with the organization's chief investment officer to reel in what he says are the “outrageous” investment costs and bring assumption percentages to a reasonable level, as well as work with pension experts across the state and country who have dealt with similar crises.

Schaaf said if lawmakers want to fix the issue, the first step is information gathering.

“How many of the plans are using outdated mortality tables? What is the range of costs for investing that the various plans are paying,” Schaaf said.

MOSERS has already responded to its struggling finances by offering lump sum payments to 17,000 former state employees. The buyouts would be 60 percent of the required amount to fund future benefits.