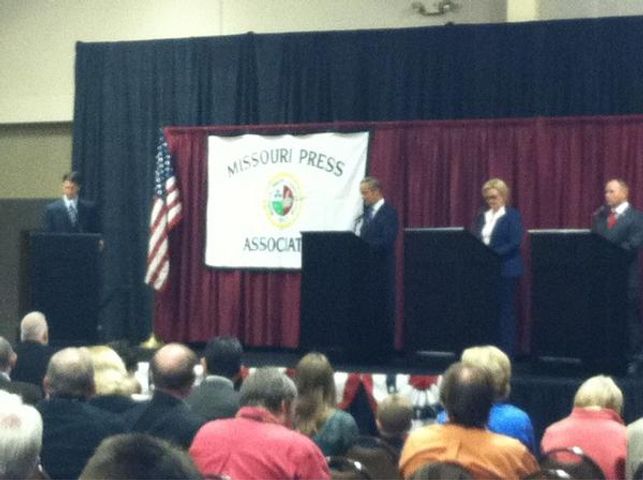 The first question of the debate asked the candidates the extent to which Akin's remarks on rape and pregnancy mattered in the election.

In August, Akin sparked controversy when he told St. Louis television station KTVI that victims of "legitimate rape" rarely become pregnant since they bodies are programmed to "shut that whole thing down."

"I don't believe that this election overall is about talk, but it's really about two visions of what America is," Akin said at the debate.

McCaskill, on the other hand, said that Akin's beliefs are out of the mainstream for most Missourians.

"It's not what he said that is the problem. It's what he believes that was the problem," said McCaskill.

"I was astonished to find that Akin sits on the science committee yet he fails to understand basic eighth grade biology," said Dine.

Akin painted his Democratic challenger as one who "votes with Obama 90 percent of the time."

McCaskill described herself as someone who has reached across the aisle to work with Republicans in the Senate, and dismissed Akin as a candidate on "the fringe."

In his closing comments, Dine drew the most laughs from the audience when he said "I promise to keep the Republicans out of your bedroom and the Democrats out of your wallet."

The candidates will share the stage again October 18 at a debate in St. Louis hosted by KSDK Newschannel 5, the St. Louis Business Journal, and KWMU-St. Louis Public Radio.