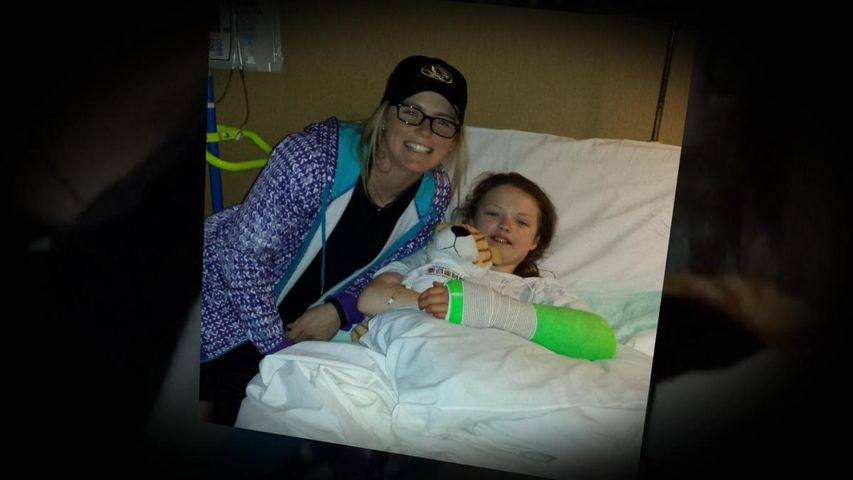 "They're both just very outgoing and goofy, always looking to have a good time," Kari Schaller said.

"It's tough to take Emily serious sometimes because she always joking around, but it definitely helps our team stay loose," Head Coach Ehren Earleywine said.

However, that outgoing personality took a hit March 28th. Emily sprained her MCL going after a fly ball, and immediately she knew something was wrong.

"It was something you never want to happen to you, and I didn't think it was that serious until the doctor told me what was up," Crane said.

Sidelined 2-3 weeks didn't sit too well with the sophomore outfielder, but a day later she met Camryn, who gave her a little surprise.

"They're all lined up and high-fived us and she walks up to me and gives me a TY beannie baby, a tiger and a card that says I hope you get better, can't wait to see you out on the field, love Camryn and my friend Tara, it was such a cute little card and so that whole game, I held the tiger, his name is Oasis, and I was trying to make sure, I wanted her to know I appreciated it and not just showboating, but I wanted her to know I really cared about it, so I was like I'm gonna sit this tiger by me the whole and it did really mean a lot," Crane said.

However, a day later, Crane learned Camry broke her arm in a softball game, which would force her to miss the rest of softball season, and of course Crane wanted to help out her biggest fan by going beyond the call of duty.

The next day, Crane and a number of teammates made a surprise visit to Camryn in the hospital, making Camryn feel like she was in a fantasy.

"I thought I was asleep at first because of the medicine I was on, and I didn't think they were there, I was really surprised," Camryn said.

It was a moment that brought Camryn to a smile and a trip down memory lane for Crane.

"And I just told her, these girls look up to you guys and I just thought that was awesome that they could do that for them and what great role models they are for the girls" Kari Schaller said.

"Growing up, you're that kid who looks up to everybody, and I told myself I always wanted to be like those people. I'm just really happy to see the way that my little tiger helped me through my surgery is keeping a smile on her face because I mean it's tough being a kid and you want to play, I mean I want to play but it's different because they think it's the end of the world, and I'm just happy that I could help in some way," Crane said.

"An incident like that can go such a long way with a young kid, it can touch them for the rest of their life, and I'm proud of her for doing it," Earleywine said.

"Makes me feel like I'm an important part of her life, like I'm really special to the team and stuff," Camryn said.

Crane will return to the playing field in the next week or two with her biggest fan, Camryn cheering from the stands.