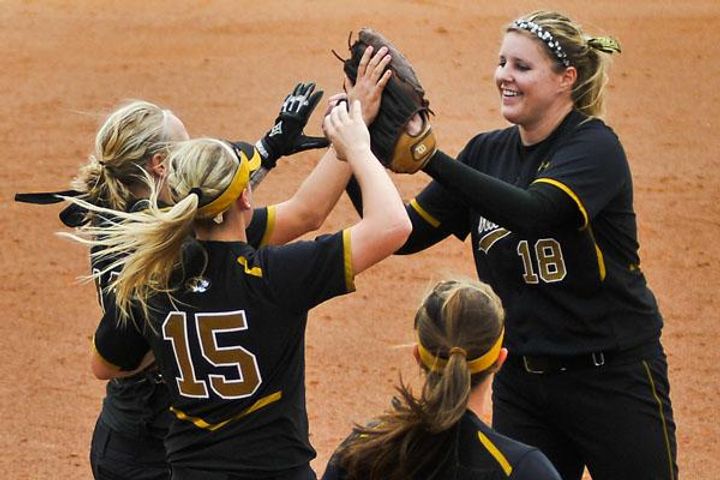 STILLWATER, Okla. - The No. 8 Missouri Tigers improved to 40-6 on the season and 11-2 in the Big 12 after beating the No. 16 Oklahoma State Cowgirls by a 5-0 score on Saturday afternoon. The Tigers scored their five runs on seven hits, while playing flawless in the field.

Redshirt sophomore Chelsea Thomas was dominant, facing just one batter over the minimum in her 10th complete game shutout of the year, improving to 23-4 on the season. She allowed just one hit - an infield single - while striking out 13. She now has 16 double-digit strikeout games on the season and has given up just four hits in her last four outings. With her 13 strikeouts, Thomas moves into second place for most strikeouts in a single season with 283 and is just four away from breaking the record.

Missouri jumped out ahead in the top of the first inning, getting back-to-back one out hits by Jenna Marston and Nicole Hudson. Marston hit a liner down the line in left field and she streaked into second for a double, and then scored when Hudson pulled a single through the right side. Ashley Fleming then reached on an error, and Marla Schweisberger took a walk to load the bases. Two batters later, Hudson scored when Princess Krebs was hit by a pitch, making it 2-0.

The Tigers added another in the top of the third, taking advantage of a throwing error by the Cowgirl catcher. Hudson led off the inning with her second single of the day, while Fleming walked to put two on with nobody out. Schweisberger laid down a perfect sacrifice bunt, which was thrown away, allowing Hudson to score the unearned run to make it 3-0.

Both teams traded scoreless fourth and fifth innings until Princess Krebs delivered a one out home run in the top of the sixth inning. Krebs sent the first pitch she saw deep over the wall in left field, making it 4-0 Tigers. A two-out double by Ashley Fleming in the top of the seventh tacked on another insurance run for Missouri, pushing their lead to 5-0. Coming into the game, Missouri was 32-0 on the year when scoring four or more runs.

Krebs led all Tigers with two RBI, while Marston and Hudson collected two hits each and scored twice. Missouri looks to complete the sweep tomorrow at Noon CT.