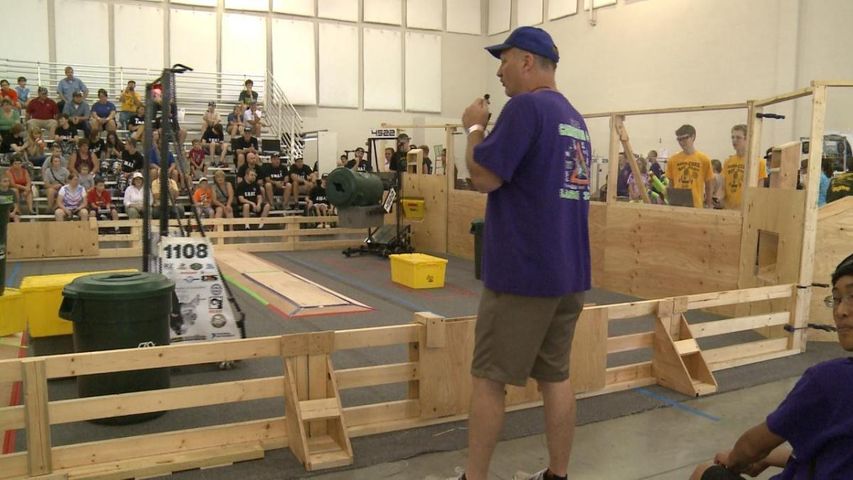 SEDALIA - On Sunday, it wasn't livestock showings that took the center stage in Assembly Hall, but robots.

The Show-Me Robotics event let the public watch competitions and demonstrations by various robotic teams throughout the state.

Missouri 4-H and SCOPE co-hosted the event that brought in 10 teams to compete throughout the day.

Sherry Comer, the afterschool service director for Camdenton R-III School District, said the event aims to show the public how exciting the STEM field can be.

"4-H isn't just about cows and pigs any longer," Comer said. "It's really exciting because 4-H branches out into many areas and robotics is definitely one of those."

"Robotics is so much fun and it's so exciting and it really gives kids a reason to see how important school is and taking rigorous classes and it gives them an opportunity to work hands on with engineers and scientists, so they can make a good choice when they go to college," Comer said.

Comer said this year's event was smaller than years in the past that usually has three times the number of teams.

"We really hope they see how exciting 4-H is and how exciting FIRST robotics is and it's a great combination for kids and then it's something they can take into their community and start up," Comer said.

The regulations at the event were not as strict as other robotics competitions. The day was aimed at spreading awareness to the public.

For Brandon Reine, a team member on Team Scream 4522 from Sedalia, it was his first time competing in the state fair and he found himself answering a lot of questions from the public.

"I think it's really good for the kids to come in here and see the robot and get inspired," Reine said. "And hopefully they'll grow up and when they're in high school they'll join their own robotics team."

Reine said he didn't even know about FIRST Robotics until his friend joined. Reine said there really isn't a lot of knowledge about it, so the partnership with the Missouri State Fair aids in increasing awareness.

"Getting out at the state fair and the public eye I think it's really important so more kids can join," Reine said.

Each year all the teams have a new robot that is specially designed to complete a specific challenge that could include throwing a ball or stacking boxes.