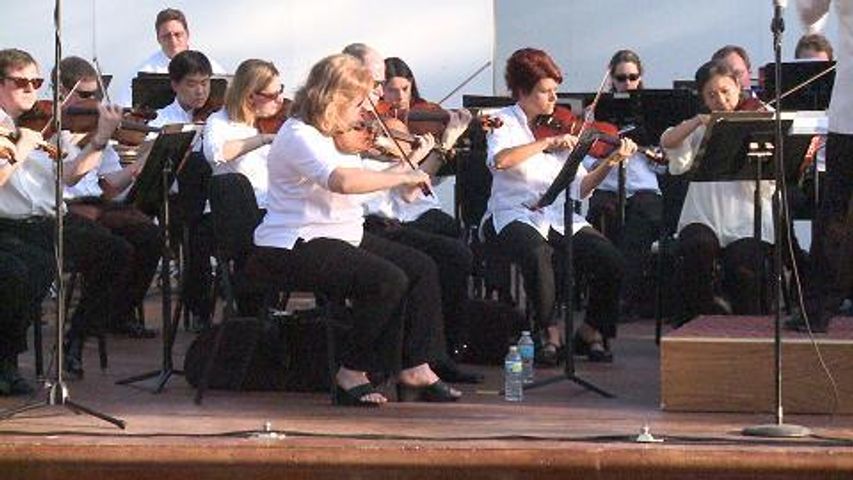 COLUMBIA - The Missouri Symphony Society kicked off their summer concert series Thursday night. The concert is one of the first performances at the new Stephen's Lake Park amphitheatre. This years concert series theme is  "Sizzlin' Sounds of Summer."

President of the Missouri Symphony Society Carole Sue DeLaite said the new public amphitheatre allows the musicians to open up to the community and attract a new audience.

"We usually have our first free concert at the Missouri Theatre but when our sponsors brought up doing it at the ampiltheatre it seemed to be the perfect idea," said DeLaite. "We are introducing the park as well as the arts."

Manager of the Office of Cultural Affairs Chris Stevens said it was the perfect summer day for an event like this.

"The series is named "Sizzling Sounds of Summer" and that could not be more perfect," said Stevens. "This concert will show off the new theatre as well as show people the talent behind this orchestra."

"There are 43 musicians here and they have all been involved in music for over 20 years," said concert master Felicia Brunelle. "These musicians only practiced for 5 hours before tonight's show, but that's what happens when you work with professionals; it's just amazing."

The symphony's first ticketed show of the season will be held at the Missouri Theatre in downtown Columbia on June 9 at 7:30 p.m.

"With affordable prices and an array of music genres, we invite central Missourians to enjoy an afternoon or night of fun, festival entertainment with family and friends." said MOSS Music Director and Conductor Kirk Trevor.

Tickets are on sale at the Missouri Theatre Box Office.