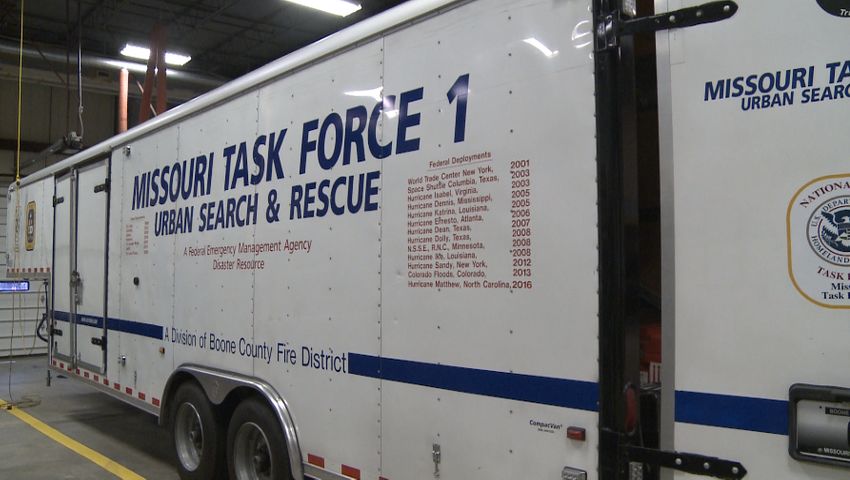 When asked if the team was available prior to the deployment, “the answer is always yes,”  Boone County Fire Protection District Assistant Chief Gale Blomenkamp said.

Blomenkamp said there are very few reasons why Missouri Task Force 1 would not be able to deploy, one of them being if they were on a training mission and already gone. The equipment is always loaded and ready to go.

The team had four hours to pack up and get on the road to Texas after deployment. The trip is about 1000 miles, which took the team about 20 hours, according to Boone County Fire Protection District Assistant Chief Gale Blomenkamp.

Missouri Task Force 1 will be a team of 47 people and have over 100,000 pounds of equipment for Texas.

Hurricane Harvey is expected to hit the coast of Texas early Saturday morning as a Category 3 hurricane.

Missouri Task Force 1 is one of 28 FEMA Urban Search and Rescue teams. Two other teams could potentially be called to Texas, including Nebraska and Tennessee.

“Local agencies have to request for assistance through their state,” said Blomenkamp, “Once they have exhausted all of their resources, then they reach out to FEMA.” FEMA then sends out the three closest teams, not including the state in need’s team.

Missouri Task Force 1 is “a group of very specialized and trained individuals,” Blomenkamp said. The team is made up of doctors, firefighters, people who specialize in planning or communications and many more positions from all over Missouri.

Each position is “three deep” according to Blomenkamp. If one person cannot go, they are able to ask the next person in line. The team is put together after deployment, pulling specific people to match the event.

Once the team is activated, they pack up, order busses to transport the team, give medical screenings to everyone going and hit the road within that four hour time limit.

The most recent local emergency they went to was the floods in southern Missouri earlier this year. Hurricane Matthew hit North Carolina in 2016 and was Missouri Task Force 1’s most recent national emergency.