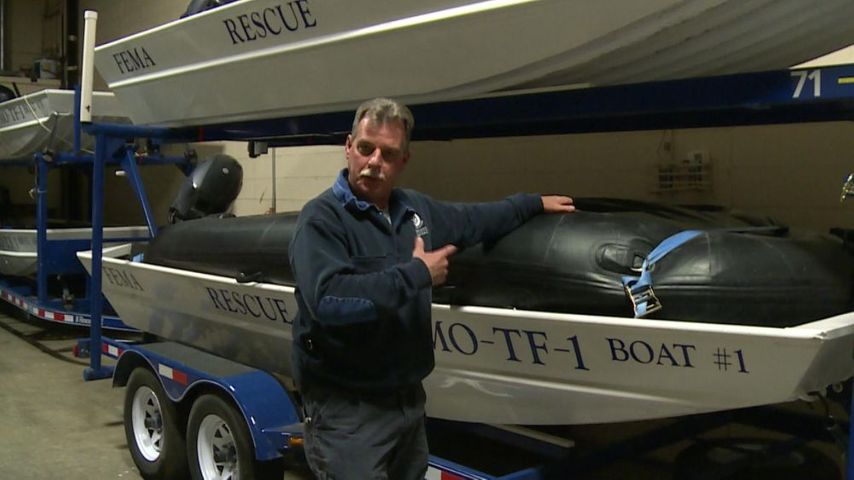 COLUMBIA - After the Missouri Task Force 1 members arrived home from their St. Louis deployment, leader Doug Westhoff said it was “heartwarming” watching all of the organizations pitching in and making resources available. He described it as, “everyone playing team sports.”

“Communities were just borderline on getting ready to be wiped out,” Westhoff said. “I mean inches of water were coming over levees, so they were very lucky."

Westhoff said the crew arrived in St. Louis about mid-day Dec. 30 and positioned the task force members by the afternoon.

“After that, we took a monitoring position as the crest came through that evening, stayed over night and then we were released the following morning,” Westhoff said.

Westhoff said the crew provided support and additional capacity for the first responders that were engaging in water rescue.

“They didn’t have a lot of extra resources and Missouri Task Force 1 was brought in to provide some additional water rescue assets in conjunction with a couple other departments,” Westhoff said.

The crew’s last state deployment was for the Joplin tornadoes in 2011. Blomenkamp said the fire district dispatches the team on local missions often, but state deployments are a rare occasion.

“It doesn’t happen often, but when that disaster does strike, it’s important that jurisdictions can call us and we can go assist them,” he said.

Westhoff said the task force enjoys state deployments over federal, because the crew can work with familiar faces.

“In the scheme of things, it is very easy to do an in state deployment, particularly with people we already know and have worked with because we have like minds,” Westhoff said.

Blomenkamp said every deployment is a learning experience.

“As we get more and more floods and are using these types of resources, we are getting better and better at staging these things,” Blomenkamp said.

Task Force 1 is all volunteer, but Westhoff said the work brings a great deal of satisfaction.

“There is always a lot of pride in being recognized as an asset in the state and in the nation and being able to go in and assist people when they need a little help,” he said.

It has 210 members that come from all over the state and specialize in various disciplines.

“It depends on where we’re at geographically, where the event is going on and how many resources they have in that particular locale and how large scale it is ,” Westhoff said.