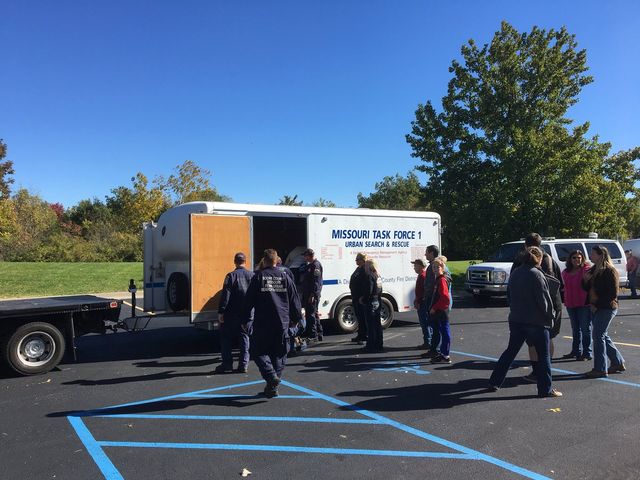 “It’s great to be back,” Task Force mission leader Chuck Leake said. “I couldn’t be any prouder of the men and women that were with us on this mission.”

While deployed, the task force traveled to many different areas in the Florida Panhandle, including some of the hardest hit areas like Panama City and Mexico Beach.

“It is amazing to watch what Michael did to that state and the swath it took, starting at the beach and working its way up through the state,” Leake said. “A lot of areas that we saw, the entire infrastructure was down when we rolled in that first morning.”

Missouri Task Force One Logistics Manager Adam Stoffer said for many on the task force, it was surreal to see the destruction Hurricane Micheal left behind.

“It’s hard to believe when you drive down a street and see every power line and telephone pole on the ground,” Stoffer said. “You see the power of wind and what storms can do.”

For Stoffer, the past month has been hectic. He was also among the task force members who deployed to Hurricane Florence in North Carolina. He has only been home for ten days since Sept. 11.

“I have great support from my family to deploy back to back like this,” Stoffer said. “I love Missouri Task Force One and the people that I get to work with. It makes it easier to go back to back.”

For the ten days the members were deployed, their primary job was to go house to house and conduct welfare checks in areas other first responders hadn’t gotten to yet. In total, the team checked around 4,000 houses.

“Missouri Task Force One was proud to be one of the first folks to get to them and knock on their door and ask them if everyone is okay,” Leake said.

Stoffer said it is rewarding to help the folks who need it the most.

“But it is hard knowing that they lost everything and all their belongings that they worked hard for," Stoffer said.

For some on the task force, the damage in places like Mexico Beach brought back flashbacks of one of their past deployments within the Show-Me State.

“There were some areas that reminded all of us of Joplin and how those communities and those areas were just gone,” Leake said. “When I see trees that are corkscrewed, and you look at the trunk of it and how they are twisted, you realize that was tornadic activity.”

Leake said Hurricane Michael should serve as a lesson for why people should prepare for what is coming.

“We are going to see more tornadoes in Missouri. Florida is going to get hit by the next Hurricane Andrew or Michael or keep on down the line,” Leake said. “When it does happen, Missouri Task Force One stands ready every time to do whatever it takes for citizens we are responding to help.”