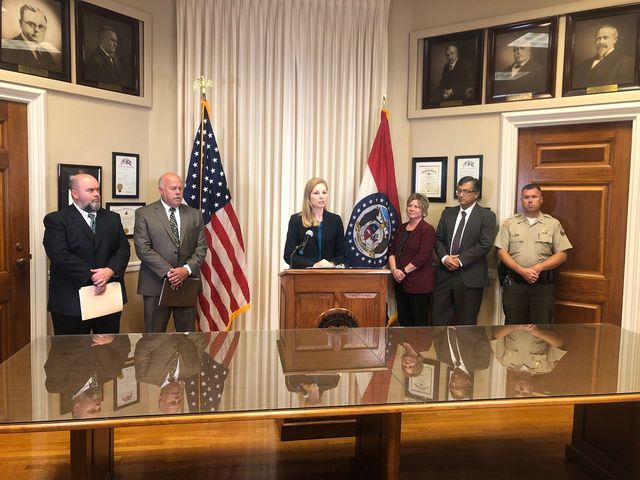 Oestreich resigned from office March 15 after being confronted by local and federal investigators. Local officials said the unusual financial activity was first brought to their attention by Jefferson City-based Central Bank.

Callaway County Commissioner Gary Jungermann said he went to High School with Oestrich and he was shocked.

"She was very emotional, very upset with herself I think," Jungermann said.

He said the it is important to regain the trust of the public.

"We're going to move forward and we're gonna learn from this and be stronger from it. I think that's the key, you know," Jungermann said.

State Auditor Nicole Galloway said Monday that Oestreich used a "shell game" to transfer money among various accounts and try to cover her tracks. She said there were not enough checks and balances in place and that Oestreich had too much responsibility over her office without oversight from other officials.

Galloway said taxes were collected appropriately, but they didn't go where they were supposed to go in the end. She said the collector would pocket the cash citizens used to pay their taxes and then covered her tracks from other funds.

She said the money will be dispersed to the public entities that should have gotten the tax money in the first place.

"Taxpayers in Callaway County now have answers. Together we have sought justice and accountability for taxpayers," Galloway said.

She said those funds should have gone to schools, cities and other local entities.

One Fulton mom, Desirea Wyatt, said it's difficult to trust politicians when they are elected to be trusted but something like this happens.

Clifford Fleming is the kitchen manager at a Fulton restaurant and he said thinks his tax payments are wasted now.

"I know a lot of people that are elected and you trust them and you assume they're not going to do bad things, they're going to do what they were voted in office to do. They have to put their hand on the Bible so hopefully that still means something to somebody," Fleming said.

Jungermann said the Callaway County officials are working diligently with the auditor's office. He asks the citizens allow time to understand the report and find the best way to fix what went wrong.

A sentencing hearing for Oestreich will be scheduled in the next few months.