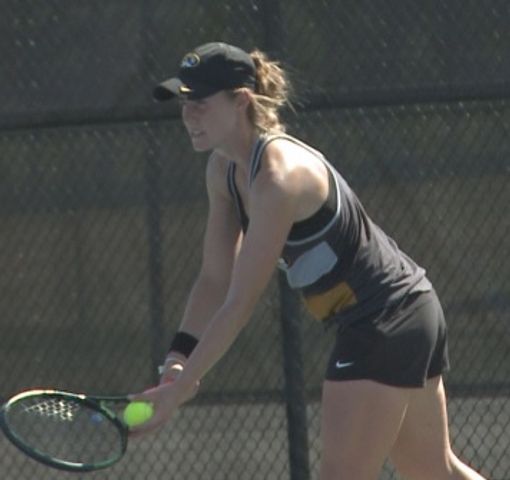 COLUMBIA – A Mizzou tennis player is breaking records in 2015.

University of Missouri senior Kelli Hine will compete in the Riviera/ITA Women’s All-American Championships this October in Pacific Palisades, California.

Hine is the first singles player for Missouri to qualify for the qualifying round of the tournament.

Hine said she is not changing her schedule to prepare for the tournament than she would for a season match.

“How hard I work on the court doesn’t change,” Hine said. “Whether I’m competing in the biggest tournament of the year or whether I’m just going to a little match in practice. It just doesn’t matter because every day is an opportunity to get better.”

Hine qualified for the annual tournament from her 2014-2015 rankings where she finished 4th regionally and 89th nationally.

Hine started playing tennis around age five and said her love for the sport and her dad, who first got her playing the game, have kept her motivated throughout the years.

She said she is not putting any pressure on herself before her first big tournament.

“I’ve never been to a tournament before, so it’s just a really huge blessing and just an awesome opportunity just to show what I have,” Hine said.

Mizzou tennis coach Sasha Schmid said she was not surprised when Hine qualified for the tournament.

“Kelli’s just one of those individuals you want to have on your team,” Schmid said. “If you have to build a college tennis player you build Kelli Hine.”

Schmid said she is excited to see how Hine performs because she deserves to be in the tournament.

“I think it’s going to be great to see her believe that she belongs in that group and I think that’s really going to be something that transforms her as she goes through her senior year,” Schmid said.

Hine will travel to California with coach Colt Gaston and will play her first match Oct. 6.

This story has been updated to fix factual errors.