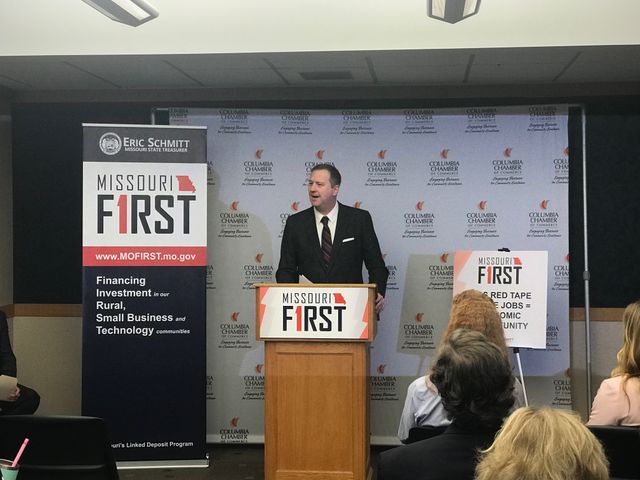 The $10.4 million is additional capital to put into small businesses, Schmitt said Thursday. The plan seeks to eliminate red tape by expanding access and streamlining the application process. It also allows businesses to use funds for more than a single purpose.

Jerry Dowell, director of government affairs for the Columbia Chamber of Commerce said, "The changes in the program allow more people to take part in utilizing those funds, which will help with job creation and building their businesses."

The linked deposit program authorizes the state treasurer to use $720 million worth of state money to hand out to banks for them to lend to businesses.

Dowell said eliminating red tape would be helpful for farmers who needed money for multiple purposes.

"Say you're a farmer, you would utilize the funds for something on the farm, but it had to be a single purpose, you couldn't diversify what you could use those funds for your entire farm," he said.

90-year-old Gene Cunningham, who has been farming since 1948, sold his cattle due to age, but realizes how important providing more capitalwith the loans program is.

"It was difficult for me, but it's more difficult now for young people to start farming, by leasing the farm and being successful," he said.

Cunningham said it's also important to be able to use fund in multiple places.

"He may need to rent the land in cash or rent it if there's land available that way," he said. "They may want to start with livestock and buy livestock breeding stock. They want to buy machinery to operate the farm and buy feed and fertilizer and other things."

Cunningham said helping farmers with funding will always be important.

"It's very necessary for the country to produce food, not only for the citizens but for the export," he said. "The important thing is to help younger farmers. See none of my children, I got four children, and none of them could buy the farm."

Schmitt said change was needed because the linked deposit program hasn't been adjusted since the 1980's.

He held a statewide listening tour to find out what people wanted to see changed, and the challenges they faced when trying to access capital.

Schmitt said matters to him.

"I grew up in a middle class family, my dad worked seven days a week in the midnight shift," he said. "I come from a family of farmers and small business owners and I know what that can mean for real people.

Schmitt said the state has a $4 billion investment portfolio and wanted to make a bigger part of that portfolio investments in mainstream Missouri.

Schmitt said more than 90 percent of jobs in the state are small business jobs and agriculture is an $80 billion a year business.

"So we think that this can be an economic development effort to help grow jobs in Missouri," he said.

Schmitt said the money comes with a 30 percent discount than the interest the state would pay with a typical loan.