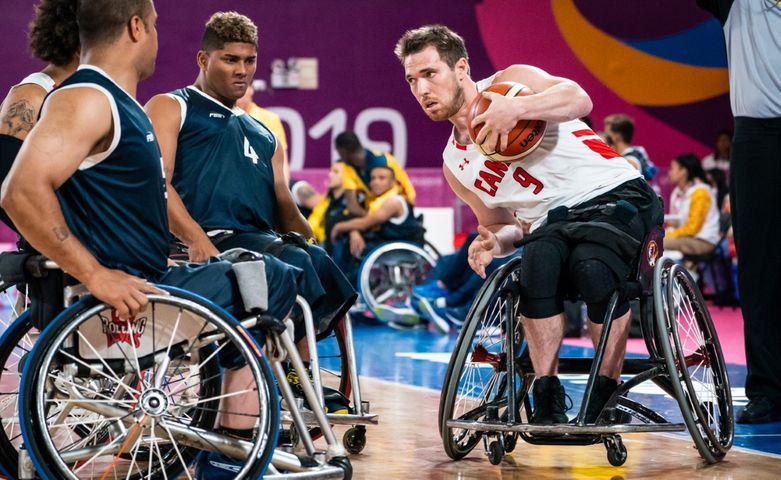 The games were from August 23 to September 1.

“I started playing wheel chair basketball in the winter of 2014, I injured my leg, my knee and my ankle in 2012, my mom’s a nurse, she works with an OT (occupational therapist) , who plays wheelchair basketball, she said ‘Hey come try it out.’ So, I tried, I fell in love and that kind of led me here,” Higgins said.

At first Higgins didn’t believe he was good enough to make the team.

“It took me awhile to figure out that’s what I was really going for, two of my mentors starting out were two national team players from my home providence or state,” he said. “So, I kind of heard stories of what it was all about, but I put them on such a pedestal that I really didn’t think I could get there.”

Since then, Higgins has made the Canadian national team three times, winning a silver medal in 2017 in Cali, Columbia.

On the other hand, Ron Lykins is one of the greatest U.S. coaches, winning 3 gold medals in the Paralympic games. Coaching in 17 International competitions, Lykins has made the gold medal round 15 times, and won 10 of them.

Even he believed in Higgins making the national team this year.

“I knew he would make it, I thought he would’ve made it, he had a really good year for us, he was already a good player before then, I think his year here he got even better,” Lykins said.

At the games, both team Canada and team USA made the gold medal round, Canada beating Columbia in the semifinal and U.S.A. beating Argentina.

Going into the gold medal game, Lykins didn’t focus on Higgins but knew he would be a part of Canada’s scheme.

“I knew if he played, he’d be difficult for us to match up with. I was happy for him; I was rooting for him the whole time except against us," he said.

Both teams qualified for the Paralympic games in Tokyo 2020.

Higgins will use these recent games to prepare for Tokyo.

“Honestly I’ve never played in a game of that magnitude before, but it was a great learning experience, and hopefully we can take that into next year, and improve the color of our medal,” Higgins said.

For now, Higgins and Lykins are focusing on the upcoming season for Missouri, the season opener is October 25, at the Intercollegiate Tournament in Marshall, Minnesota.

This year, the team looks to improve on their fourth-place finish.