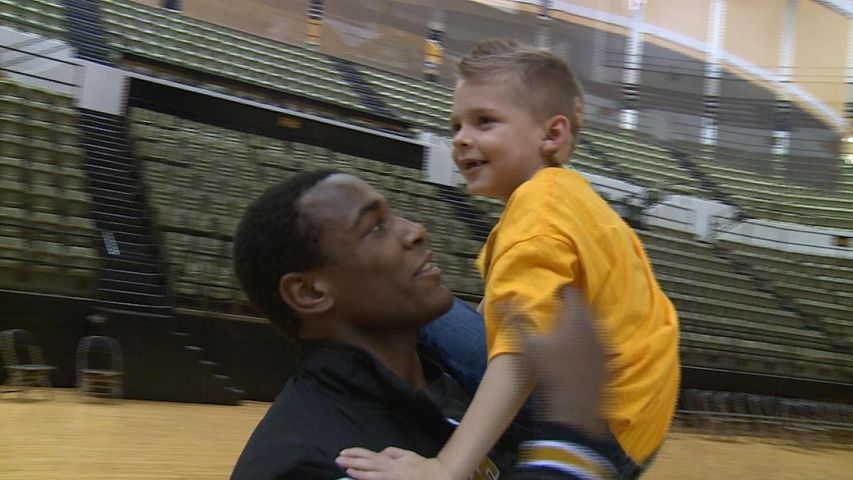 COLUMBIA - Brayden Deaver wakes up at 5 a.m. almost every day to work out. There's just one thing - He's seven-years-old.

"He does pushups, sit-ups," Brayden's father Tony Deaver said. "He has me hang him from his ankles, and he does sit-ups that way."

"Brayden was born with gastroschisis, which is where his bowels were on the outside of his body when he was born."

Deaver said, "He was in the hospital for the first six months he was alive, and that's when he lost his hearing."

Brayden has cochlear implants to help him hear, but he still has trouble speaking.

Deaver said, "It's just a long process for him to learn how to talk."

"The first time he said mom was so amazing," Lange said. "I think a lot of people take for granted that their kids can talk and speak."

Deaver said, "He had just turned five was the first time I actually heard him say dad."

Deaver said, "To find out that he knew sign language, he was so excited. He just kept signing, ‘we're the same, we're the same.'"

Deaver said, "For some reason, Brayden came across him on YouTube, when J'den had the purple hair at Hickman. To Brayden, J'den is a god of all athletes."

But the two had never met, until recently.

Lange said, "It all started at Hy-Vee. Cox and some of his teammates were signing autographs."

"As soon as we walked in, J'den started signing to Brayden, and Brayden's an excellent signer, but he didn't sign back. He was just like oh my gosh! You know wow!"

Cox said, "He was really star-struck the first time he saw me."

Lange said, "Brayden was like oh my gosh, he's real!"

Cox said, "I signed him my name, my sign name, and he gave me his."

Cox and Brayden's friendship only grew from there.

Cox said, "He's got a lot in common with me, which is really weird cause I'm like, you're seven,"

They both play the bass guitar.

Lange said, "J'den is just such a great role model to Brayden."

Cox even introduced Brayden to the entire No. 1 ranked Missouri wrestling team.

"He got to take a team picture with us and break us down."

Since then, Brayden hasn't missed a match, and he's even caught the eye of Missouri wrestling coach Brian Smith.

"For us, he's become a part of the team that he cares about us, and we care about him."

Smith said, "He cares about us, and we care about him. When I look up in the stands, I see a lot of people like that, but when I see him, it's like ‘Ah man, he's back!'"

Cox said, "The kid's got a piece of my heart you know. If I could I would stop time for him. I'd practically do anything for him."

Maybe one day, Brayden could be the next J'den.

Smith said, "Hopefully he turns into this big time stud wrestler, and he becomes a Missouri Tiger, like a J'den Cox."

Lange said, "He never gives up, and to me that's amazing because he's my baby."

Cox and the rest of the Missouri wrestling team will be in St. Louis for the NCAA national championship, March 19-21. You can bet Brayden will be there to cheer on his favorite wrestler.