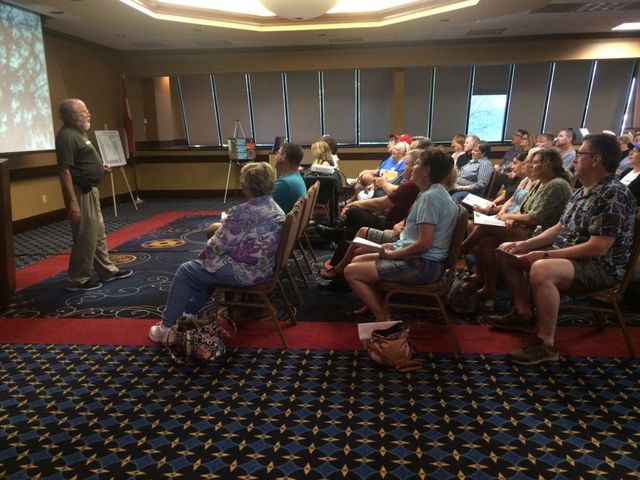 JEFFERSON CITY - Missourians and residents from all across the country will get to experience a total solar eclipse on August 21.

Dozens of people showed up at the Capitol Plaza Hotel on Thursday night to learn more about the total solar eclipse and how they can participate.

The city is hosting a three-day event from Aug. 19-21. The city will have activities planned throughout the three days, including a mini carnival, a corn maze, a 5k run and brunch with NASA Astronaut Mike Hopkins.

Jefferson City will experience 2 minutes and 29 seconds of totality on the banks of the Missouri River.

NASA is coming to Jefferson City to broadcast the eclipse live on the steps of the Missouri Supreme Court with NASA Astronaut Janet Kavandi — a native of Carthage, Missouri. NASA announced the city will be one of seven locations from which NASA will broadcast a live feed of the solar eclipse. NASA will also be bringing its Journey to Tomorrow exhibit.

Eugene Vale with Missouri State Parks gave a presentation on the eclipse and why it is important. One of the things he talked about was the different types of eclipses. He also talked about how to stay safe during the total solar eclipse.

Event Coordinator Jill Snodgrass said the eclipse "won't have the same impact as it will when you experience the eclipse with our neighbors and other like minded people."

"I got a really good sense of the enormity of it as far as the interest, you know, the number of people that could actually be in attendance and all of the different events the area is going to be putting on," resident Duane Mobley said. "I' m really looking forward to the three day event. It really looks like it's going to serve the area very well. And I was most impressed with what they had to say about how it could benefit our sense of community right here. When everybody comes and goes, that's one thing, but what we have right here in Jefferson City."

Mobley said he is looking forward to the 50 mile bike ride on the day of the eclipse.

To learn more about the three day event, visit the Capital Eclipse website.

You can learn everything about the Show Me Eclipse on our dedicated page.