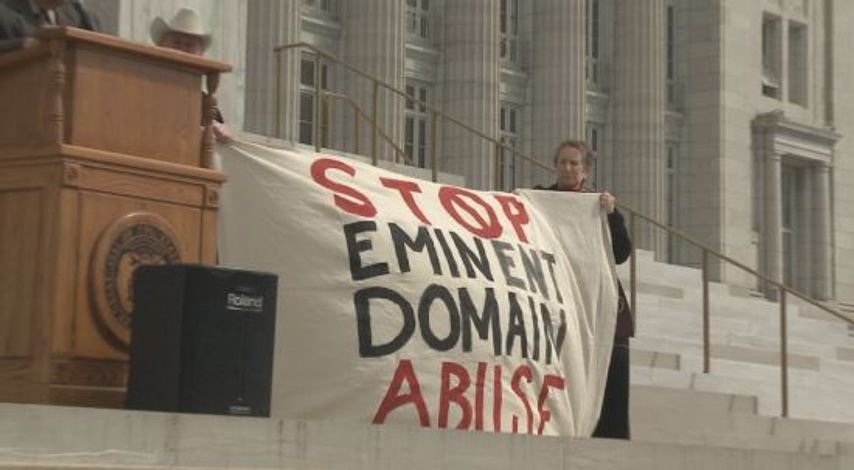 JEFFERSON CITY - Missouri farmers and landowners lobbied the State Capitol on Wednesday in support of proposed eminent domain legislation that would give landowners extra protection.

House Bills 640 and 795 were proposed by Rep. Nate Walker, R-Kirksville, in response to concerns from his constituents over the Mark Twain Transmission Project run by Ameren.

The project was approved unanimously by the Missouri Public Service Commission for eminent domain.

The project would run a electrical transmission line from Palmyra to Kirksville and north to the Iowa border.

"They were not listening to the people, a pony show that wasn't happening right," Walker said.

He explained his constituents were frustrated by their lack of rights in the process of determining where Ameren built.

"In general, we feel like Missouri is under-protected with respect to property rights," said Deborah Games, one of the lobbyists in attendance.

If passed, the legislation would:

The Mark Twain Transmission Project construction has yet to begin due to continued litigation.

Walter Spilker, a farmer from Shelby County, joined the lobbyists and voiced his concerns over the impact utility projects have on farms.

"When they plant these poles out in the middle of the fields, it creates hazards for our equipment, it makes it hard to plant to apply chemicals and fertilizers," Spilker said.

He said utility projects would damage his yield, hurting his bottom line.

ATXI is committed to responding to the concerns of landowners, government agencies, county commissions and other community representatives regarding the Mark Twain Transmission Project. This project, which the Missouri Public Service Commission has determined is in the best interest of the citizens of Missouri, will deliver reliable, low-cost renewable energy and economic benefits to northeast Missouri. We remain committed to working with landowners and stakeholders to address any concerns and to thoroughly and responsibly evaluate feasible options to minimize the potential impacts of this project on stakeholders.

Both bills are waiting to be assigned to committee.

Walker was joined by Rep. Jim Hansen, R-Frankford, and Rep. Jim Neely, R-Cameron, in addressing the group in support of the two bills.