Missourians rally to mark anniversary of the Women's March 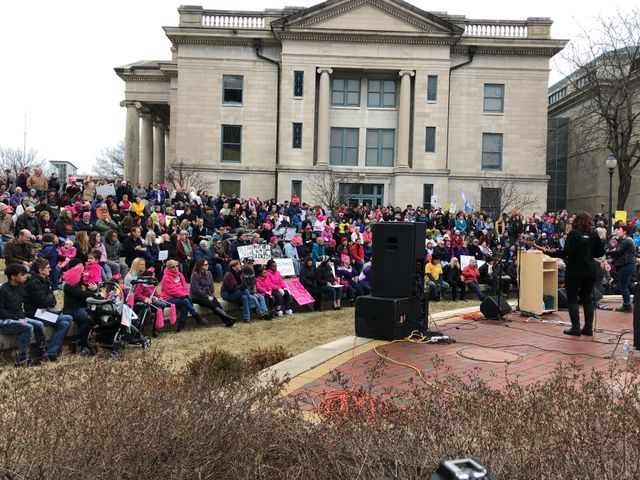 COLUMBIA - Hundreds of Missourians gathered at the Boone County Courthouse Plaza Saturday to march 10 blocks with the intention of leaving a positive message for change.

The Mid-Missouri Solidarity Network and CoMo for Progress organized the 3-hour rally and march to draw attention to many issues, including exercising the right to vote, civil rights, the wage gap, the environment, foreign policy and health care.

"Get out and vote in November!" said Rebecca Shaw, lead organizer with CoMo for Progress. "The Women's March this year is power to the polls. That's really the message we are pushing. Not just be here but be there in November for the person who shows your best values."

The event comes one year after the Women's March, which advocated for women's rights, reproductive rights and human rights. It was the largest single-day protest in U.S. history.

Shaw said the mid-Missouri march will happen every year until there is a significant change in government.

"They need to know that we're still here, that our voice is loud, and that we won't be stopped," she said.

The Columbia march started and stopped at the courthouse and lasted about 45 minutes.

"If there's one good thing that can come out of this situation, it's that people are working and coming together like never before," said Renee Hoagenson, the Democratic candidate for Missouri's 4th Congressional District.

The march had more than 50 co-sponsors, including the Missouri National Organization for Women, according to Mark Haim, Mid-Missouri Peaceworks director.

"This goes to show that we're here, we're loud and we're not going to let other interests take away our freedom to live as we see fit," said Stephanie Clark, a volunteer with NOW.