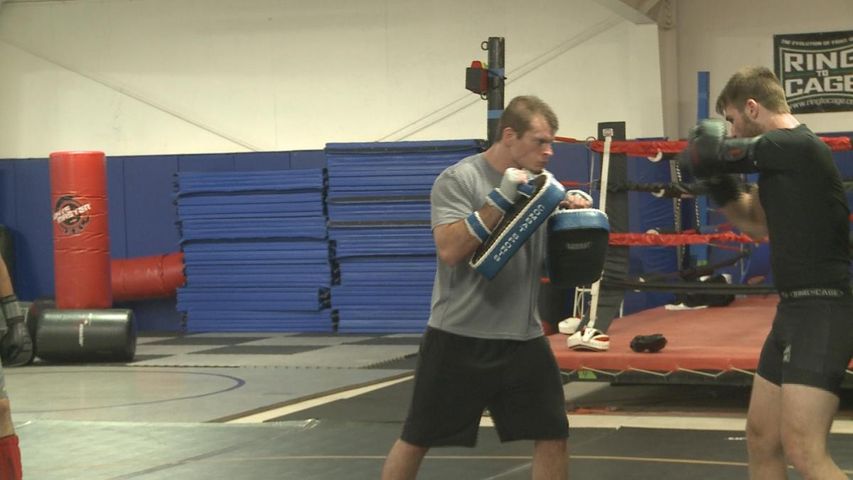 COLUMBIA - Mixed Martial Arts is one of the fastest growing sports and with that new popularity brings new fighters.

Nate West, a senior at the University of Missouri comes from a small town, Gower, Mo. Gower is a town with a population of only 1,500 people.

West got into MMA a year and a half ago after his friend took him into the gym for the first time. He instantly fell in love with the sport he originally thought would just provide him with a fun way to exercise.

Now 3-0 in his MMA fighting career, West said he hopes to go professional because he only has so long to make it as a professional fighter.

West isn't your typical fighter in the physical sport that requires constant use of your arms to strike on the offensive and protect on the defensive. He's limb different- born without an elbow and forearm on his left side.

West uses his differences to his advantage, and he finds his motivation and will to succeed overpower any obstacle he has to overcome in the ring.

"I have to be bigger, faster, stronger because I might not have the grip that someone else has. I think I have to prove myself a little bit more. I know, I get the looks when I first walk in."

His roommate and training partner, William Starks, has been by his side since they started working out together.

"I've been in his corner for every fight which means I'm in the ring helping him with strategy and he's got this confidence and opportunity to open doors for other limb different athletes," Starks said.

West said because he grew up in such a close-knit, small community he never faced any kind of discrimination other than a junior high coach who wouldn't give him equal opportunities to shine.

"If anyone would have made fun of me, my dad would have just called their dad and been like ‘stop making fun of my kid', and it would have been handled."

NubAbility, a camp offered annually in Illinois, gives limb different children the opportunity to learn how to play sports.

West has been involved in the camp for two years and said his life will forever be changed from the people and experiences he's had as a coach.

"These kids are so ready to learn, and they're going to change the world. They inspire me to keep fighting in the ring."

The camp, he said, isn't just about sports.

"We're there not to just be coaches, but to be mentors both physically, but also mentally.  I want to show them that they can do anything that any able-bodied athlete can do."

West believes the sky is the limit as far as his future goes, no matter what obstacles come in his way.

"The big key is just the people that believe in me."