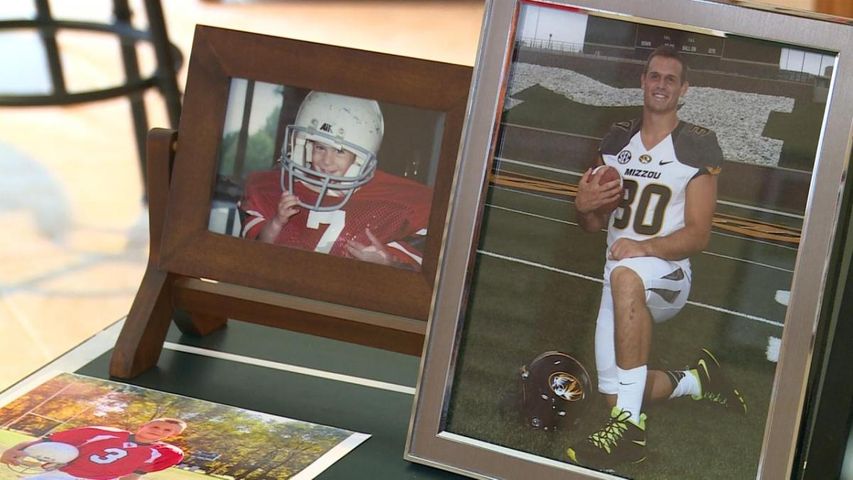 COLUMBIA - "I'd like to say that was the plan from the day they were born, to be Division I athletes, but it really wasn't," Joe Scherer said with a laugh.

For the Scherer brothers, athletics have always been a part of their lives.

Four boys.  All four of them Division I athletes, but one important message was with them through it all.

"Incredible work ethic," said Nick, who is heading to Mizzou next year on a wrestling scholarship.

"You gotta work hard at it." This comes from Joey Scherer, the oldest of the four brothers and the one who really started it all, with a football scholarship at Penn.

"Work ethic," echoes Michael, who is looking at his senior season next year on the football team with Tigers.

"Really have them learn the work ethic and the dedication that it takes to succeed, because you can apply that to any situation in life.  And just to see where it took 'em," Joe said.  "So far, it's taken them pretty high places."

High places include Daniel, the second oldest brother, becoming the Pac-12 Champion in wrestling in 2013.

The brothers have always competed with each other growing up over the years and each one said it has helped them in the long run.

"I guess it was pretty fun," Joey said with a laugh.  "Always having someone to do stuff with, practice with."

" I mean, for me, I got beat up a lot," Michael said. " No, having older brothers that showed me the way helped a lot."

Dori said that having four kids being able to achieve what they want to do has been amazing to watch.

"It's nothing short of a true blessing," she said with a smile. "Not everybody gets these opportunties. It's a blessing that they have been able to reach the levels that they all have."

"I'm a pretty proud papa, I'd say right now.  I really wouldn't have it any other way."

Joe said the reason he got his boys into sports was to teach them that if you want something in life, you had to work hard for it. And that has really hit home with each of his kids.

"I knew that if I worked hard, that good things would happen," Joey said. "If at first, you don't get sucess, I think that it showed that, things would turn out the right way if you worked hard."

Nick really learned that lesson while watching his brothers play sports growing up.

"I really learned what you need to do to become a great athlete, to become a Division I athlete, and to excel at it," he said.

As the last Scherer heads off to college, the competitiveness between the brothers will continue on.

"We were always so competitive," Michael said. "We would get into arguments, whatever.  It ended in wrestling matches, sometimes it got bloody."

These infamous wrestling matches are something that are a point of pride for the Scherer boys.

"Well, I've never lost," Joey boasted. "I'm undefeated. Once Michael and Daniel and Nick started getting bigger and better at wrestling, I chose not to wrestle, to conserve the title. But I am undefeated."

"He's probably undefeated because when I got to about, 8 years old and I was bigger than him at the time, when he was about 14, he stopped wrestling me," Michael said with a laugh when he heard about Joey's statement. "I've never beaten Daniel, ever, and I don't think that'll ever happen."

But while Michael may be undefeated against Nick, he might have to watch out now that little brother is coming to Mizzou.