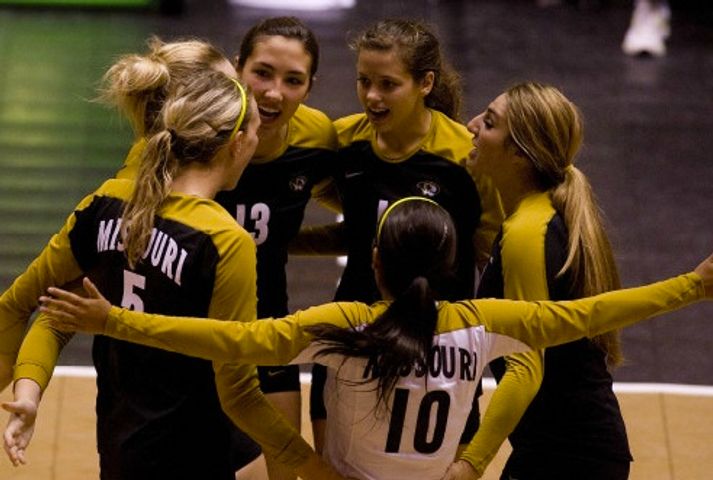 Juniors Molly Kreklow and Lisa Henning each landed on the All-Tournament team. Kreklow finished the weekend averaging 11.00 assists per set (143 over four matches) while collecting 33 digs, four service aces and 14 kills on .667 hitting. Henning led the Tigers with 57 kills (4.38 per set) on .321 hitting while adding a team-best five service aces and pulling in 25 digs over the four matches.

Mizzou opened its day by sweeping Nicholls State in very convincing fashion, hitting .477 with 48 kills in just three sets. Sophomore Emily Wilson and Henning did most of the damage, combining for 24 kills on just 44 swings and one error, good for a combined .523 hitting. Wilson had 12 kills on .500 hitting while Henning added 12 on .545 hitting. Sophomore libero Jade Hayes pulled in 11 digs in the match and Kreklow was outstanding as usual, spreading 41 assists with seven digs and three kills on six attacks. She guided the Tiger offense to a .477 attack clip.

The nightcap with the No. 23 Wolverines did not go as well for the Tigers. Mizzou was stagnant offensively in the first two sets and Michigan jumped all over the Tigers, winning the first two sets convincingly, 25-19, 25-15. Mizzou had just 21 kills and 11 attack errors over the first two sets. The Tigers came out of intermission and played better, hitting .367 with 12 kills in the third, but it wasn't enough as the passing broke down late in the set, allowing Michigan to escape with a 25-22 set win, clinching the match. Henning led Mizzou with 17 kills on .233 hitting in the match and Hayes tallied more than 10 digs for the fourth straight match as she pulled in a team-best 14 digs.

The Tigers will be back in action next weekend as they head to Nashville of the Lipscomb Invitational.