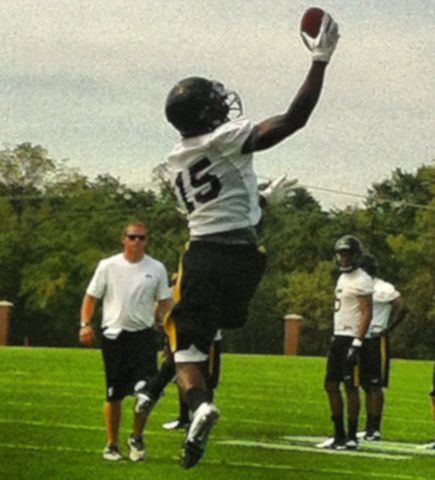 COLUMBIA -- The Missouri football team headed out on the Kadlec Practice Fields on Thursday for their first practice as an official member of the Southeastern Conference. Before practice started, head coach Gary Pinkel announced the four captains for the 2012 season.

Offensive lineman Elvis Fisher was selected team captain for a second year. Fisher was originally selected at the start of the 2011 season but suffered a knee injury during fall camp. Linebackers Zaviar Gooden and Will Ebner and wide receiver T.J. Moe also received the honor of being named captains for Mizzou.

On the topic of Moe, he was on the list of notable injuries for tweaked hamstring along with right guard Justin Britt who is suffering from a jones fracture in his foot. However neither of these injuries are serious and Mizzou expects both to be healthy by the end of camp.

Also wearing red was Henry Josey for the same knee injury from last year. Josey is not expected to play this season.

Good news for Tiger fans though. Quarterback James Franklin was NOT wearing red during practice. Franklin got plenty of snaps on with first team offense Thursday afternoon.

First year player Dorial Green-Beckham, better known as DGB, was not listed on Thursday's release of the updated depth chart. That could changed before the first scrimmage of camp which is set for August 11.