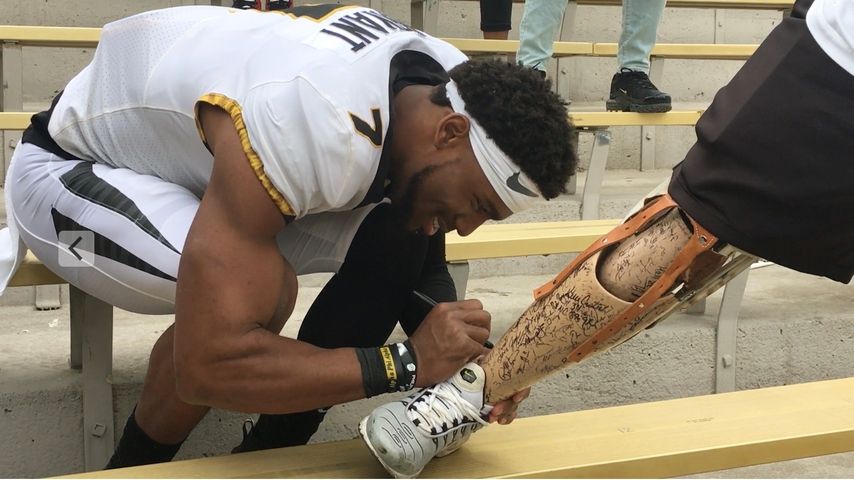 COLUMBIA - Brian Garner claims to be Mizzou football’s biggest fan, and to prove it, he's got a decade's worth of autographs he carries on him, literally.

“I don’t feel special, but it’s such a cool feeling to relate to these athletes," Garner said.

He hasn’t missed a Mizzou home football game in twelve years and has made friendships with many players and fans over the years.

“With all due respect to all of the fans in front of me, all the season ticket holders who have been around for like seventy years, there’s not a bigger Mizzou fan than I am. Bar none,” he said.

At the Mizzou spring game this past weekend, Garner saw Mizzou football quarterback Kelly Bryant and knew it was his chance to get a new signature.

“I jumped. I jumped right in. The opportunity presented itself. And he goes, 'Oh yeah.' And now I’m done," he said.

Garner’s favorite signature doesn’t come from an athlete, however.

“My biggest thrill so far in Mizzou football is when I got Gary Pinkel to sign my leg. Gary Pinkel is the reason I became such a rabid fan,” he said. “I will forever remember that moment."

Garner's path to becoming a fan started fourteen years ago when friends gave him tickets to some football games.

“Before that, I could’ve cared less about Mizzou,” Garner said.

But, once he experienced the atmosphere and liveliness of the football games, he said, he was hooked. Garner bought season tickets and now it’s his thirteenth year as a season ticker holder.

Garner travels to away games and the tailgating follows him. He helps lead a group called “Mizzou Tailgating” on Facebook so fans can meet and discuss plans for their next upcoming event.

Gerald Nathan tailgates with Garner and said he enjoys the camaraderie Garner creates.

“Brian is an awesome guy. This atmosphere is great,” Nathan said.

Garner said he enjoys "the devil out of it."

“I think that’s what keeps me young is my silliness with the tailgating and the athletics at Mizzou and meeting people," he said.

Garner said most of the friends he’s met are through sports or tailgating.

“The friendships I’ve made with the fifty or sixty football players over the last couple years and their families is unbelievable," he said. "I take none of that for granted. It is so cool being that close to the program."

Garner’s daughter, Lauren Garner, has tailgated with her father for ten years.

“He has a lot of energy and a lot of excitement through everything he does," she said.

Garner said the Mizzou community makes him feel like a lucky man and a proud Tiger fan.