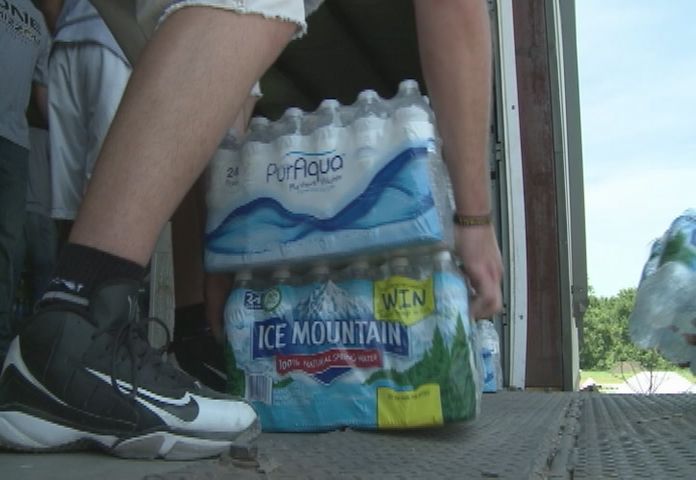 JOPLIN - The Missouri Athletic Department's new slogan is One Mizzou. And although Columbia sits 240 miles away from Joplin, the Tiger football team showed this week what the motto truly means.

Carol Mann's bedroom is now a window to destruction. Mann said, "Thank goodness I wasn't in there or I wouldn't be standing here today."  Mann and her mother survived the joplin tornado by hiding in their bathroom. "We were both scared, like it was gonna come and just blow us away."

Now she looks to rebuild, a process kicked off by the Mizzou football team. On Friday, several Tigers traveled to Joplin clearing debris, hauling away tree limbs, and picking up the pieces of a fractured community.

Head Coach Gary Pinkel said, "One of the tremendous things about things like this is it brings out so many good things in people. It shows when we're a country we can disagree on many, many things, but when tragedy hits, we unite."

The 14-hour day began with the team unloading donated items from the football semi and stocking them into a trailer set for Forest Park Baptist Church. On the ride over, many in the Missouri contingent got their first up close look at the disaster zone.

After lunch at the church, a prayer, and greetings from fans, the team arrived at its cleanup site.
Mark Hill, a redshirted sophomore offensive lineman said, "I worked at a gym on 20th and Connecticut and I think its gone." Hill lived in Joplin for six years. His parents moved back a year ago and were home when the tornado tore through town. Hill added, "It was just a scary time, I was out of town, got a flood of texts all at once, from family and friends checking on me. Luckily no one in my family was affected, made it through safe."

After spending days helping family and friends clean up the wreckage, Hill knew he needed to come back to Joplin with his football family.

Hill said, "Our team just grows closer as we get to work on things, sweat, give a helping hand anywhere we can." A team building task with no pigskin, no pads, but just a new pair of gloves to lend a helping hand. "I'm really thankful for all of this."