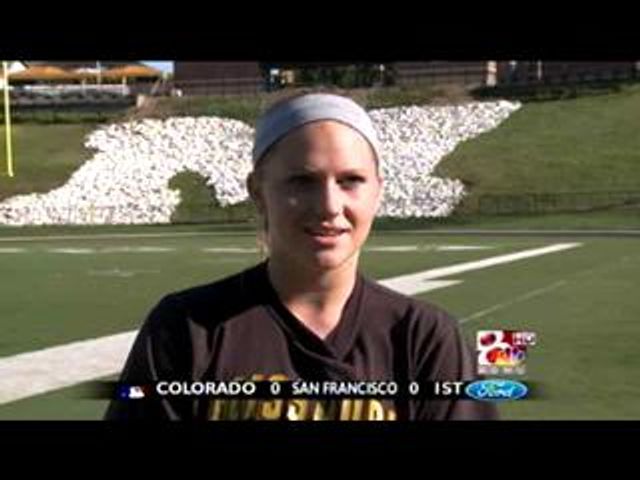 COLUMBIA - McKenzie Sauerwein has made her debut as the starting goalkeeper for the Mizzou women's soccer team in her own kind of way: quietly.

Not many know about the goalie that has an 8-2 record to start her career and one of the top goals-against-averages in the Big 12.

"My confidence level has risen since last year. I try to focus on being in the present, just focus on what's going on at that certain moment." Sauerwein said.

Sauerwein is a young player in her first season in collegiate ball, but she hasn't been timid, in fact using her personality to gain her team's respect.

Sauerwein and the Tigers have a lot to be happy about early. Although they dropped their first two conference road games, they did beat five major conference opponents, and a top ten Ohio State team in their non-conference season. It's led McKenzie to make some lofty goals.

"Definitely shutouts. I definitely look for shutting out everybody." Sauerwein said. Her teammates have the same goal.

"We always wanna have shutouts for every game." said Mal Stipetich. So, if the Tigers have to quietly sneak up on opponents with a rookie goalie, that's okay with them.

"She's very quiet, she definitely has a presence within the team, and you can tell sometimes if you catch her when she doesn't think you're looking," said Shaunna Daugherty.

The Tigers know what they have in McKenzie Sauerwein.

"I was here a couple years ago in 2009 when we won the Big 12 Championship outright, and I feel very good about the goalkeepers that we have here right now." said goalie coach Shaunna Daugherty.

Sauerwein only gave up an average of one goal per game through the Tigers first 10 games. Mizzou women's soccer will host Texas A&M at Walton Stadium on Friday at 6:30.