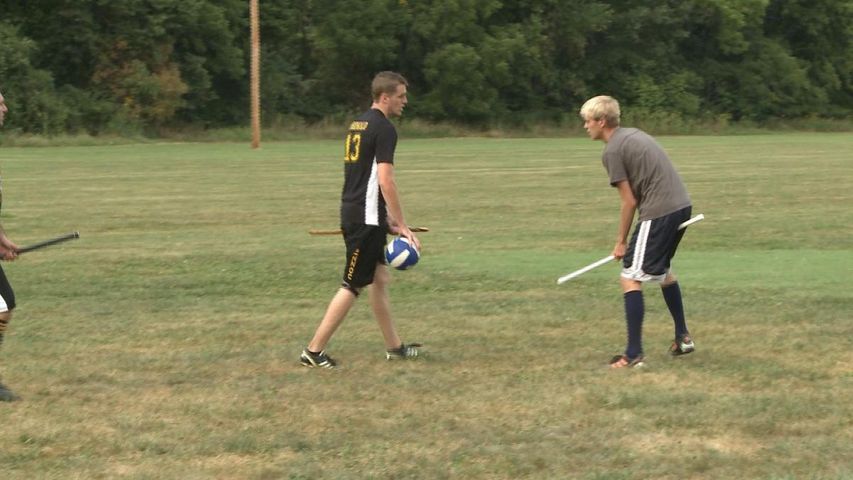 COLUMBIA - On a hot September afternoon, Quidditch captain Daniel Shapiro kneels on the ground in front of his team's three goals, sweating through his jersey as he waits for the start of the match.

"The snitch has been released!" calls the acting referee, in this case a spare member of the Quidditch team.

The Mizzou Club Quidditch team is having one of it's first practices of the new season. The team is split into two squads of six as they prepare to scrimmage against each other.

Shapiro shifts into a sprinter's stance. Four balls lie in the middle of the field, one volleyball representing the quaffle, and three semi-inflated dodge-balls, the embodiment of bludgers.

After a satisfactory pause for dramatic emphasis, the referee calls out, "Brooms up!" and Shapiro and his team charges toward the middle of the field.

There are several strategies at play in the quidditch match. The three chasers on each team go after the quaffle; every time one of them throws the quaffle through one of the three hoops, their team scores 10 points. The task isn't so easy though; a keeper patrols in front of the hoops and tries to keep the quaffle out. But before the chasers can even get to the goal, they have to run a gauntlet of opposing chasers who try to steal the quaffle and beaters who "knock" other players off their brooms by pegging them with one of the dodge-balls.

"There's an advantage to having two of the three bludgers because it makes defense a lot easier, and that's important for a small team like us," said Quidditch president Josh Ebbesmeyer.

The team only had 10 members last season, making depth a big issue for the team. Teams start seven players in each match, the three chasers, two beaters, one keeper and one seeker, who is responsible for catching the snitch and ending the game. With only three substitutes for their matches, the Missouri squad found themselves gassed at the end of tournaments. That's why they rely on new players to join the team.

"The ceiling is as high as we want it to be," said co-captain David Nordwald. "If we can get upwards of 15 people, we can place highly at tournaments."

One of Shapiro's players, a new member to the team, scores an impressive goal as he fires the quaffle through the tallest hoop for a score.

"Nice goal!" shout a number of Quidditch players from both teams.

"We try to cultivate a family atmosphere here," Ebbesmeyer said. "We like to go to football games together, hang out at the pool at the (Mizzou) RecCenter on the days after matches because we're usually pretty sore, stuff like that...I think the family atmosphere is why a lot of people stay."

"We encourage a lot of activities outside of practice, whether it be on-line gaming, going out for food, what have you," Nordwald said.

The scoring and rules of Quidditch come almost verbatim from the Harry Potter series, but there is one key difference.

"We can't fly, obviously," Ebbesmeyer joked. "But each player has a "broom" between their legs, and if they ever drop their stick or are hit with a bludger, they have to go back and touch their goal before they can play again."

"Water!" Nordwald yells at the end of of the scrimmage. No one knows the score because no one kept count. The players, all tired and sweaty from the heat and the exertion, gather around with their water bottles after a long, tough practice.

There are a lot of drills and work that goes into playing for the Quidditch team. At one station, players work on ball-handling skills and shuffling drills. At another, they practice the proper form for tackling. At a third, shooting is practiced, both hard tosses and lobs.

"Our first tournament is September 21st at Southern Illinois," Ebbesmeyer told the group.

The team plays in a number of tournaments each year, and reaches out to other universities and clubs to help schedule matches and arrange tournaments. In fact, the Quidditch team is one of the last vestiges of an old rivalry.

"It is the last remaining bit of the 'Border War,'" said Shapiro, the vice president of the team. "Really, there is no more 'Border War' (since Missouri joined the SEC) and so we still have that rivalry for the Mizzou-KU people."

Shapiro pulls one of his teammates aside. "I can help you work on your floating shot," Shapiro said. "That's a really good tool to have."

Shapiro is one of the original members of the Quidditch team that formed three years ago. Things started out well, but an internal conflict of egos led to the disruption of the team as a club sport and its near extinction. But under Shapiro's guidance, the team has regained its popularity and is seeing its membership improve.

"Daniel's put in a ton of work to get us where we are," Ebbesmeyer said. "We held practice on the quad (Francis Quadrangle) last year so people could see us as they walked by after classes...we had a booth at Summer Welcome and we got a table at the Club Fair, and we're seeing some more freshman turnout."

"It's my legacy, my baby, here at Mizzou," Shapiro said. "I want to take something I built and make it great.  I want to see it become that team where everyone says could be good, and make that great."

After the waterbreak and announcement, the team gathered in for a huddle.

"ONE, TWO, THREE, TIGERS ON THREE!" shouted the team.