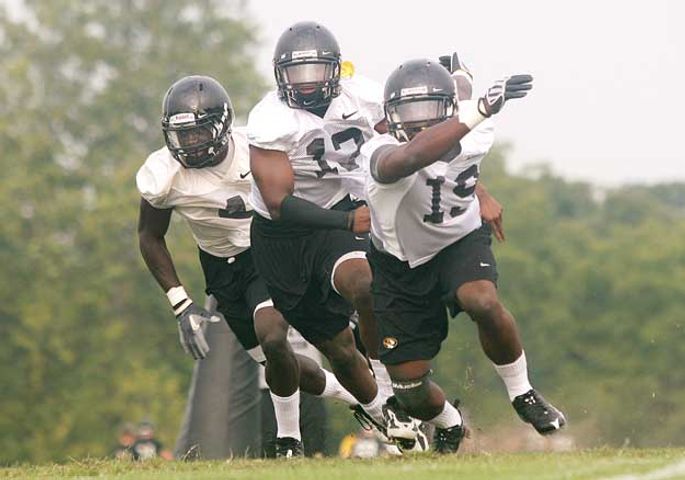 COLUMBIA -- They play the same position on the Missouri Football team, and they are best friends. For three players on the TIger team, their relationship extends farther than the field.

Marcus Lucas, Jimmie Hunt and Bud Sasser: three players on the Missouri Football team who are more than just teammates.

Junior wide receiver Marcus Lucas explains, "We're roommates, wideouts, we dominate on the field and off the field, and we're just kind of really close."

"Bud's the more serious one out of the house. I'm the jokester and Marcus is the goofball, he just sits there and laughs about anything," sophomore wide receiver Jimmie Hunt joked.

The motivation between the three doesn't stop on the field. Bud Sasser, sophomore wide receiver, said, "You know we talk trash about them and just say you know you can't come home today, you ain't catch that ball, you can't come home. But, if someone catches a really good ball or something like that you know we congragulate them."

Receivers say there are perks of living with teammates who play the same position. Jimmie said, "We're able to talk about what we would do on certain routes and how we would run it against certain coverages and it's very helpful to get the insight from eachother."

Bud gave us his input, "We like communicating out there, even times when me or Marcus or Jimmie are out there we just talk about it when we are having fun. Like during the scrimmage, me and Marcus were next to each other at one point in time we were like 'okay roommate, okay roommate, I see you out here' and stuff like that, just stuff to keep us going."

The trio has given themselves their own name -- it comes from Rick Ross' latest rap album.
"Three kings, power circle, what do you mean, it's natural, it's our house, it means that you're the stuff, go for it, do whatever it takes to get the job done."

Even though they call themselves the three kings, one is not exactly living like royalty. They rolled a die and Marcus lost and got the smallest bedroom. You can catch the three receivers in action at Missouri's first home game on September 1st against Southeastern Louisiana.

Missouri River Regional Library brings back a traveling library for the community
JEFFERSON CITY - The Missouri River Regional Library's 'Bookmobile' is back on the road delivering books after not running for... More >>
36 minutes ago Tuesday, July 14 2020 Jul 14, 2020 Tuesday, July 14, 2020 5:51:00 AM CDT July 14, 2020 in Top Stories
Share:
Email
Facebook
Twitter