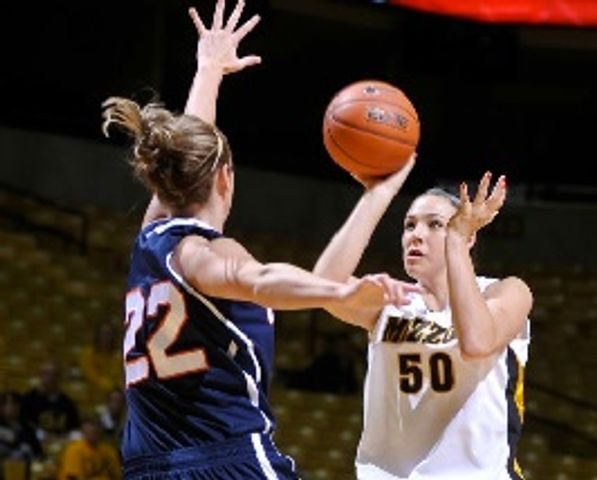 COLUMBIA - Senior Christine Flores had a record breaking night to help lead the Tigers to an improbable comeback victory over the Eastern Illinois Panthers. After being down by as much as 15 at one point, the Mizzou Women's Basketball team fought back to beat Eastern Illinois by a final score of 56-54. Flores was a major factor in the game, earning the first triple-double in the Big 12 so far this year.

Flores ended the night with 14 rebounds, 25 points, and 10 blocks. Her 10 blocks along with her five steals are both new single game career-highs for Flores. Her 10 blocks also sets the single game blocks record at Mizzou. The previous record (7) was held by Flores, Amanda Lassiter and Stretch James. Also in the record setting trend, the Tigers recorded 14 blocks in the game, tying the previous single game high which was set against Iowa State in the 1983-84 season.

After a quick three-pointer from Junior Liene Priede to start the game, Eastern Illinois fought back leaving Mizzou on the wrong side of a 17-7 score five minutes into the first half. The Panthers continued to hit the basket extending their lead to 26-14 with 7:30 minutes left in the half.

Despite shooting only 25% the Tigers put in a valiant effort with Seniors Flores and BreAnna Brock combining for 11 of the Tiger's 14 points. Mizzou didn't let that stop them, though, as Freshman Morgan Eye sank back-to-back threes to help pull the Tigers closer, making it a 28-23 game with three minutes left in the first half. Eastern Illinois closed the half on a 6-0 run sending the Tigers into the locker room down 34-23.

Flores led the Tigers in all categories with 10 points, three blocks, three steals, and six rebounds at halftime.

The Panthers came out right where they left off, adding five more points to their total. This created an 11-1 run that began in the first half which brought the score to 39-24 three minutes into the second. The Tigers fought hard, going on a 9-2 run of their own bringing them within ten points of the Panthers. With a score of 41-33, there with a little over 11 minutes left in the game. Junior Sydney Crafton drained a basket and earned a free throw to bring Eastern Illinois' lead down to three with a score of 44-47.

From then on it was a defensive battle and Mizzou held it close by a score of 49-46. The Tigers refused to give up and with just under two minutes left Flores went to the line and sank both free throws to put Mizzou ahead 52-51. With 30 seconds left in the game, Flores netted another basket only to have it cancelled out by free throws from Eastern Illinois tying the score up at 54 apiece.

A foul in the dying seconds of the game sent Flores to the line shooting one-and-one. She drained both shots and gave Mizzou the edge with 14 seconds left. Mizzou held on with solid defense to end the game with a win by the score of 56-54.