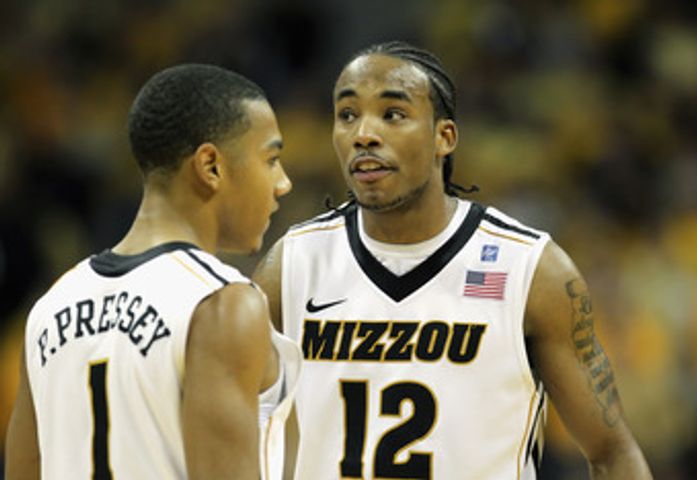 KANSAS CITY - Mizzou took advantage of an Oklahoma State team decimated by injuries. The Tigers used a 24-3 first half run to put the game out of reach early.

Missouri Junior Guard Michael Dixon, Jr. said "Kimmie was running the floor well because he didn't have to box out a big. So, he was playing like a guard in transition. He got some easy transition baskets and got us going."

Big man Steve Moore also said this about Kim English's Thursday night's performance, "Not even the buckets of him in transition. He got a lot of easy baskets by running and stuff like that because we were getting defensive stops."

In the second half ... Marcus Denmon picked up where English left off. At one point ... Denmon scored 11 straight for Mizzou and totalled 24 points in the game.

Sophmore guard Phil Pressey said, "We got guys that can put the ball in the hole. You can't stop both of them. You just gotta pick your poison."

And Pressey delivered the poison in Thursday night's match-up. He dished out a career high 12 assists and picked up five steals.

Moore said,  "Phil did an amazing job. I would nominate him player of the game. All those steals he got and his defensive intensity and all that stuff. "

The younger Pressey said it largely had to do with fellow teammate, English. Pressey said,  "Kimmie was hot early. He was a big reason why I got a lot of assists early and then with Marcus hitting shots, Ricardo, my brother, and Mike scoring. I mean when they hit shots I can get a lot of assists."

The blowout allowed former Tiger football player Andrew Jones to get off the bench in his hometown.

Andrew Jones said,  "If I wasn't on the basketball team I'd probably be here watching anyways. It's a lot better to get a free ticket courtside on the bench than pay and sit up in the stands with everybody else."

Jones now gets a front row seat at the Big 12 semifinals ... to see a Missouri team on a mission.

English said,  "We just want to win a championship. It's not a chip on our shoulder. It's really businesslike. We're just trying to get stops and get baskets. That's a simple equation."

The Missouri Tigers will return to action Friday night, 9 P.M. CT, at the Sprint Center.