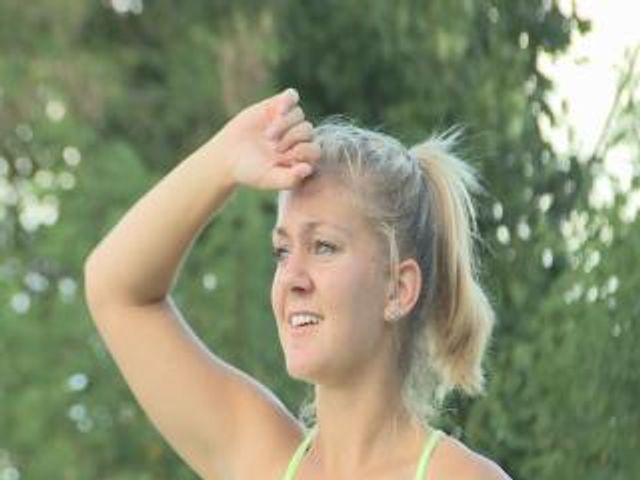 COLUMBIA - For Mizzou feature twirler Halie Hart, twirling has always counted as a sport, and she has always considered herself an athlete.

"Twirling encompasses all aspects that comprise a sport," Hart said. "It's athletic, it's mentally and physically challenging, you are hard on your body a lot of the times. I think it's often looked as more of an art or talent and some even call it a hobby, but since we dedicate so much time and physical energy, it's definitely a sport."

Like any top collegiate athlete, Hart's faced injuries throughout her career. At one point she was out for six weeks with a torn hamstring .

"There's bursting blood vessels, I jam my finger, sometimes the baton hits you in the face when the sun is in the way," Hart said. "There's multiple bruises all over our body that we can't even explain since we just keep on going and don't even realize we're injured until we stop."

While preparing for a Mizzou football game against UCONN, Hart severely bruised her hand and had to practice with it bandaged.

For the past three seasons, Hart's been Mizzou's feature twirler, performing in front of tens of thousands of fans each week alongside the more than 300 members of Marching Mizzou. And the band realizes the talent she brings to the field with them.

"The band loves her", said Laura Cooke, drum major of Marching Mizzou. "Sometimes they get distracted because how awesome she is and how great she is to be in the band."

Being a feature twirler at a top college football program is one of the hardest positions for an athlete to achieve at the collegiate level, as many programs across the nation only have one to two twirling spots available, with most twirlers keeping the job for all four years.

Hart's journey to Mizzou is a unique one, and her path to Columbia was unexpected.

She grew up in a family with a long line of twirlers. Both Hart's mother and grandmother twirled at Oklahoma State when they were in school. However, Hart originally didn't want to twirl.

"I always knew about it, but they never pressured me or made me follow in their footsteps," she said.

But then, at the age of ten, late for many in the sport, Hart picked up the batons for the first time.

"Once I started I fell in love with it and I've been twirling ever since," Hart said.

After being a successful twirler in high school, Hart's plan was to follow in her mother and grandmother's footsteps and twirl for Oklahoma State. But after two years in Stillwater, no spots opened up for Hart and she considered retiring from the sport completely.

However, that spring she received a call from Dr. Brad Snow, Director of Marching Mizzou and an old family friend, who told her to come up to Columbia for an interview.

"I've known her for about ten years and from the time I met her I knew she was going to be a special talent," Snow said. "I knew she ran into a roadblock at Oklahoma State and actually one of my old assistant directors at Oklahoma State let me know what was going on and I immediately contacted her. It was right about the same time we were holding twirler auditions here and I convinced her to audition."

She accepted and got a partial scholarship.

"I was really fortunate Dr. Snow contacted me and gave me an opportunity to continue my dream of being a collegiate twirler," Hart said.

In her time at Mizzou, Hart has flourished, performing in two SEC Championship games, a Citrus Bowl and a Cotton Bowl against her old school Oklahoma State.

"My entire family graduated from Oklahoma State and [playing them] was something I never thought I'd have to deal with," Hart said. "However, my family is very supportive and even though their blood runs orange they bought gold shirts and sat on the Mizzou side and cheered for the Tigers. That game was the icing on the cake and solidified that the decision I made was the right one."

While football season is fun for Hart, she said her real season is when she competes nationally.

This past summer, while donning a Tigers uniform, Hart competed in the National Baton Twirling Championships, placing third in the downfield event and winning the WOW Award, given to the nation's most outstanding collegiate twirler.

"To hear my name called as the recipient was just incredible," Hart said. "I'm going to treasure that moment for the rest of my life,"

After her recent success, Hart is hoping to grow the sport of twirling at Missouri. She says the main reason she wanted to twirl in college wasn't for the fame or to perform, but to grow the game at the collegiate level.

"I would like to see in five to ten years an increase in scholarships, because there are many positions and opportunities for other athletes to receive scholarships than we do, and we're putting in just as much time and dedication and skill to what we're doing," Hart said. "I know a few universities have adopted this and a lot of twirlers are on full-ride athletic scholarships, which is incredible. I think it's great and just what the sport needs."

While this football season is her last twirling for Mizzou, Hart is also tasked with grooming freshman twirler Lindsey McCormick.

McCormick, a highly-touted freshman from Houston, performs alongside Hart at all games this season. Though Hart won't be out on the field with her next season, McCormick said she's ready for the challenge.

"One day I'm going to have to take her spot and that's going to be pretty big shoes to fill, but it's been really nice to have her here to show me around and show me how to do things" McCormick said.