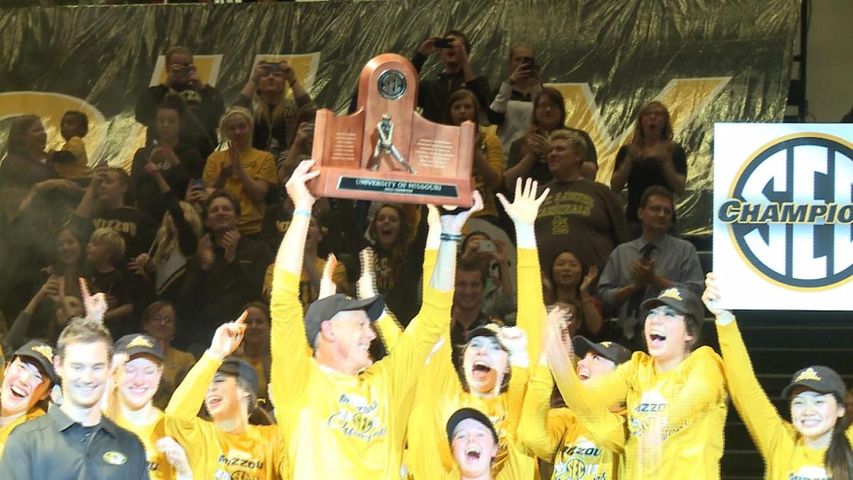 COLUMBIA - Mizzou Volleyball will be looking to add another win to its perfect record Friday. The team will take on Indiana University-Purdue University Indianapolis in the first round of the NCAA Tournament.

As the No. 4 overall seed, Mizzou will host the first two rounds of play at the Hearnes Center. It is the first time the school has been seeded this high in the annual tournament. Missouri won the SEC Championship and the volleyball team was the first Mizzou team to win a championship in the new conference.

This season, Mizzou has seen large crowds at the games. The Tigers have averaged about 3,230 fans per match and when the team clinched its first-ever SEC Championship, attendance hit a record high at 7,879 people.

Some are now saying the school's success is encouraging students across mid-Missouri to get involved in the sport.

"Especially with this Mizzou success now, it's kind of bringing a lot more attention to it and people are seeing it is fast paced. It's explosive. It's a lot of fun to watch," said Molly Dean, a coach for Club CoMo Volleyball.

Dean said Club CoMo just finished up with tryouts for the 2014 season in early November. She said there seemed to be a lot more new faces this year than last. Dean said volleyball is an up and coming sport in Missouri.

"People are starting to recognize it more for it's competitiveness, and quick explosive play," Dean said.

Boonville High School volleyball coach Susie Stone said not only is Mizzou's success having an impact on the sport's popularity but it is also sending positive messages to those already playing volleyball.

"To me it says to them that anything is possible if you work really, really hard and if you believe in each other and if you set your standards high," Stone said.

Taylor Fry, a senior volleyball player at Boonville High School, said she looks up to players for Mizzou volleyball this year for how well they've played as a team. Fry said she plans to play volleyball in college and strives to be more like girls on Mizzou's team.

"As a volleyball player, we all want a team that is just that together and that influential. And when you're together like that you can do anything," Fry said.

Mizzou will open the NCAA tournament against IUPUI at the Hearnes Center at 6:30 p.m.