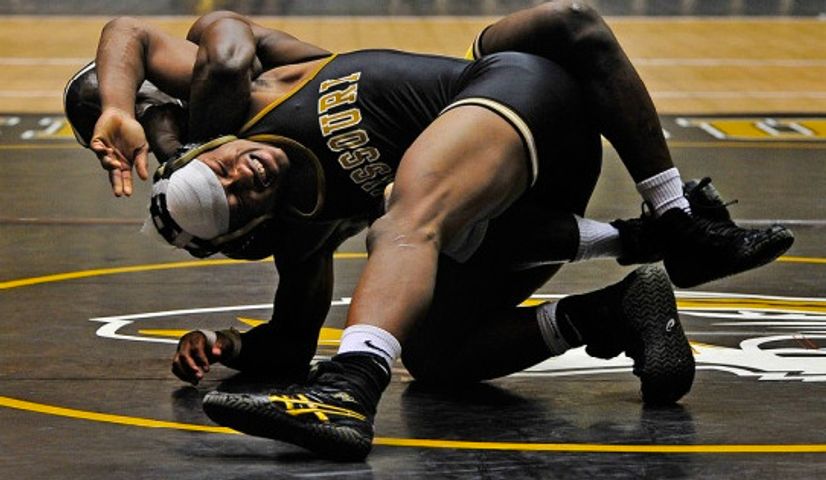 COLUMBIA - The fifth-ranked Mizzou wrestling team lost to second-ranked Oklahoma State, 21-13, on Friday night at the Hearnes Center. The match was contested side-by-side with the Mizzou gymnastics program as part of the Beauty and the Beast as 6,486 fans attended the unique event. The highlight of the night for the Tigers was at 174 pounds as Todd Porter upset top-ranked Chris Perry, who was 21-0 this season and had won his previous 22 bouts. Porter earned a major decision, 9-1, after dominating Perry throughout the bout. Also earning wins for the Tigers on Friday were Alan Waters, Nathan McCormick and Nicholas Hucke.

Oklahoma State took the first three bouts, including a pair of close decisions. At 184 pounds, No. 10 Chris Chionuma edged ninth-ranked Mike Larson, 5-4. Following Larson, Brett Haynes lost a close decision to Blake Rosholt, 4-3, despite nearly scoring back points late in the third frame. Devin Mellon, filling in for top-ranked Dom Bradley, was then pinned by third-ranked Alan Gelogaev with 44 seconds remaining in the second period, giving OSU a 12-0 lead after adding bonus points heading to the lighter weights.

Waters earned Mizzou's first win of the match when the second-ranked Waters defeated Eddie Kilmara, 4-3, despite giving up a late reversal in the third period. That cut the Cowboy lead to 12-3 heading into McCormick's bout at 133 pounds. McCormick and third-ranked Jon Morrison went into the third period tied at two-a-piece, and McCormick scored a big two-point takedown about a minute into the frame that ended up being the deciding points.

Mizzou earned its third-straight win in the match as Hucke won an exciting 5-4 bout over Julian Feikert. An escape and a point for accumulating 1:32 of riding time in the third period gave the Tiger senior his eight win of the year. Drake Houdashelt then lost a tough bout to top-ranked Jordan Oliver, 4-2, as OSU regained a 15-9 lead headed to 157 pounds where Mizzou's Kyle Bradley  took on Alex Dieringer.

After a scoreless first period, Dieringer started down in the second and earned an escape and a takedown to open a 3-0 lead before Bradley earned a one-point escape. He tallied two more points on escapes in the third, but ultimately fell, 5-3, giving OSU an 18-9 lead headed to 165 pounds.

Zach Toal took on third-ranked Tyler Caldwell at 165 pounds. After three periods of 1-1 wrestling, the two grapplers went through the sudden victory period and both tiebreakers without a winner, so they went back to the second sudden victory period. Toal was taken down by the third-ranked Caldwell 31 seconds in as he claimed the bout, giving OSU a 21-9 lead headed to 174 pounds.

Todd Porter faced off against top-ranked Chris Perry in a rematch from earlier this season when Perry pinned Mizzou's 174-pounder at 1:18. Porter scored a great takedown early in the first to take a 2-0 lead over the top-ranked Perry before allowing an escape. Perry started the second down and Porter scored a two-point nearfall to open a 4-1 lead. Porter held strong in the third, tacking on an escape, takedown, and a stalling point after Perry had been warned twice. Porter accumulated 2:58 of riding time in his 9-1 major decision over the top-ranked 174-pounder in the land.

Mizzou is back in action Saturday night against No. 12 Oklahoma. The dual between former rivals will begin at 6:30 at the Hearnes Center.