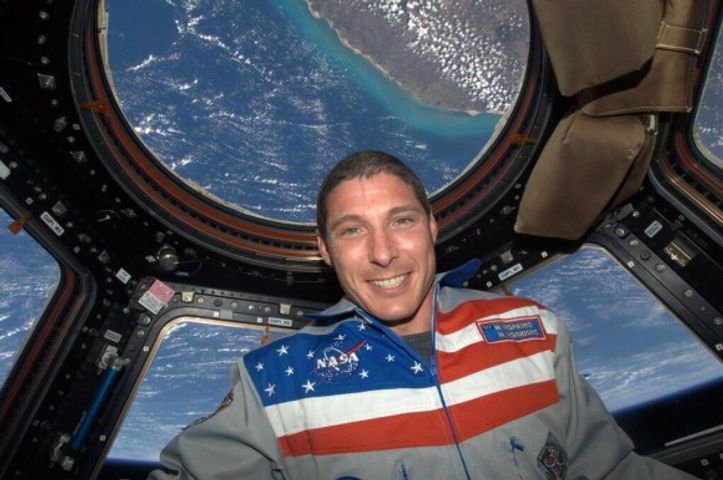 KOMU 8 News arranged to talk to Hopkins alongside Koichi Wakata and Rick Mastracchio, two additional crew members on board the International Space Station.

"Welcome aboard Columbia," said Hopkins. "You are looking at three guinea pigs right now. A lot of the research that's going on up here involves us and what happens to the human body in weightlessness. For example, we are doing a research on the spinal cord and how it changes in the weightless environment."

Astronaut Mastacchino added, "Where it leads is who knows? That's why we do this research cause great things can come out of it."

People on earth can also see the view from above through the crew's social media. "It's kind of fun to try and pick out those unique events that are happening up here on the station or unique views that we get to see either of the earth or of the station itself and share that with people," said Hopkins.

More than 35 thousand people follow Hopkins on Twitter, but some of his true followers are still in Missouri. Hopkin's step mom, Paula Hertwig Hopkins is one of them.

"Being able to exchange the emails and the texts with him have been great," said Paula Hertwig Hopkins. "It's been wonderful that he is able to take out the time for me and be able to share that with me."

So how does Hopkins have Mid-Missouri ties?

"He grew up in rural Missouri," said Paula. "That is so cool in my mind and the fact that an individual to come out of rural Missouri with not a whole lot of money, but a whole lot of support from his mother and his father. Education was important and the drive and spirit can put somebody basically to the International Space Station."

"I would love to say hi to everybody in Missouri and thanks for all the support over the years," said Hopkins from Outer Space. "I certainty wouldn't have got here without all of that. Missouri is a wonderful place. I haven't lived there long term since I finished high school and went off to college, but I certainly miss it and enjoy the time when I get to come back home."

Thats not the only thing Hopkins inherited from his dad, Ogle Hopkins.

"Mike and Ogle liked to invent and so they had a couple projects they were working on in the garage when Mike would be home," Paula said. "When Hopkins went off to study and play football at the University of Illinois, Ogle would go, too. All those games that took place in Urbana, he would drive five or six hours that it took to get from the farm which was halfway between Richland and Osage Beach to go to all of those games."

Paula said after college, Hopkins wanted so badly to be in space and applied multiple times. Then one day, Hopkins got the call and made a call to Paula. "I pulled over on the side of the road and Mike let me know he got it," said Paula. "He got in, and I said 'oh my gosh, I cannot believe it,' and then I wished his dad would have known too."

Some bittersweet news after Hopkin's dad, Ogle passed away after battling Cancer and couldn't see his son travel upward on the Soyuz to Outer Space. Afterall, Hopkins listened to his dad's advice. "Give it another lick," said Paula. "It was his dad's saying. And he gave it another lick, that lick was the winner."

Now Hopkins strives to help others through the space program.

"The human research we are doing is not only going to help us go further out to the universe and the solar system, but is also helping us right there on earth," said Hopkins.

While Hopkins looks down on Earth, Paula thinks someone may be looking down on him. "Maybe the Lord opened up a little window and let his father peek down," said Paula.