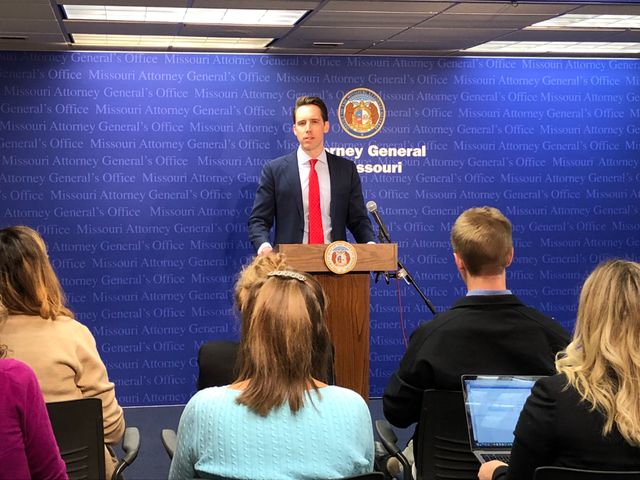 Hawley believes the media giant violates the Missouri Merchandising Practices Act, which is the state’s principal consumer protection statute. Hawley’s investigation stems from what he calls three major offenses by the online giant, which will serve as the basis for the investigation.

“This is an investigative subpoena,” Hawley said. “It carries the force of law and compliance which is not optional.”

Hawley said the investigation will focus on three primary issues:

No search engine has collected more information on its consumers than Google, said Hawley. His first issue is to find out what Google does with this information. “We want to see if Google’s privacy policy accurately discloses the scope of its data collection, and its data use and sharing,” Hawley said. We have to see whether it uses third parties and whether Google’s practices respect and protect consumer privacy.”

The second issue will focus on allegations that Google has lifted information from competitor’s websites to use on Google’s own sites and Google’s products. “This is sometimes called scraping, Hawley said. “This operation hurts businesses and drives Google’s competitors out of the market.”

The third issue is potential antitrust violations. “When using Google’s search engines consumers expect that the highest-ranking result for their search will be the most relevant,” Hawley said. “Substantial evidence suggests that Google may manipulate results to list Google affiliated websites higher in the search results.”

Hawley said if this evidence is true, this would be an unlawful attempt to increase Google’s power as a near-monopoly in the market.

Google, Inc. has already been subject to an almost 3 billion dollar antitrust fine in the European Union’s market place for alleged manipulation of search results.

Hawley believes Missouri citizens deserve to know what’s being done with their private, personal and confidential information. Consumers have the right to know whether Google is using and sharing their information with third parties. “If it is disclosing information and profiting from it, the people of Missouri deserve to know. If the company is using anti-competitive tactics to stifle completion, it should end.” Hawley believes a free and fair marketplace is essential for protecting American consumers.

“The bottom line is that Missouri will not give Google a free pass.”

Google issued a statement shortly after Hawley’s announcement for an impending investigation. Spokesperson Patrick Lenihan said, “We have not yet received the subpoena, however, we have strong privacy protections in place for our users and continue to operate in a highly competitive and dynamic environment.”

Attorney General Hawley is running for Claire McCaskill’s U.S. Senate seat, and assured media outlets that he was not chasing this investigation as a means of self-promotion.

“It’s our job to get to the truth and we’re going to.”