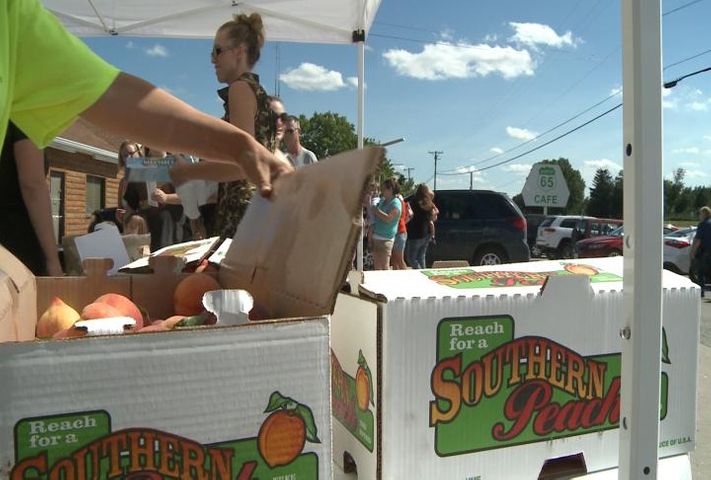 PETTIS COUNTY - Lynn Albers grabbed boxes of peaches from the cold back of the semi-truck, and placed them in the warm arms of the people in line. After traveling across the country from Georgia, some of the peaches made it to their final destination--outside the North 65 Cafe in Pettis County, near Sedalia.

"The truck is going to Lincoln, then Omaha, tomorrow," Albers said.

Albers works for The Fruit Club, a two-month-old company that delivers fruit from family orchards to the Midwest using refrigerated semi trucks. The Fruit Club delivers the produce to different areas based on the volume of online orders, for either Washington Bing cherries or Freestone Alberta Georgia peaches. The company buys the produce in bulk from an orchard, drives it to the selling location and sells the products in bulk.

"We use the smaller, family orchards, rather than the bigger, commercial orchards," Albers said. "We just find that we get a better product, they're more conscious of what's going on in their orchards. We try to do this to bring good fruit to the families."

The company began in Sioux Falls, South Dakota, where Albers and most of The Fruit Club employees are based. Most of them worked at Lincoln Trucking Company, and use the company's trucks to deliver the fruit. Albers, along with another co-worker, decided to buy some Washington Bing cherries they delivered for a few years prior, and sell them to the community in Sioux Falls. Albers said they sold the 1,500 boxes of cherries in nine hours.

"We thought that people would like it, but we weren't expecting to be bringing in six or seven truckloads a week," Albers said.

Saturday's stop in Pettis County was The Fruit Club's second trip to Missouri, but many employees said this one featured more customers. Many of the people in line heard of the company via Facebook, a tool Albers said she didn't expect to be as useful as it has been.

"It's amazing what being online can do for a business in this day and age," Albers said with a laugh.  "You can grow very quickly."

Tonyia Bridges, a West Sedalia resident, bought cherries from The Fruit Company last month, and thought the fresh food made the trip to North 65 Cafe worthwhile.

"As long as it's tree-ripened, it has a lot more flavor, and sweeter," Bridges said. "I think it's worth the trip out here to get it."

"I think this is great," customer Brandon Elliott said. "I think it's important, especially for kids nowadays to get the fresh stuff. To get the fresh fruit, I'll drive."

Fruit Club coordinator for Missouri and Illinois Layrsa Detzler wants to add drop-off locations in Columbia, St. Louis and Blue Springs in the future. She said Sedalia has been a great spot, and the company will look for more stops if the demand is there.