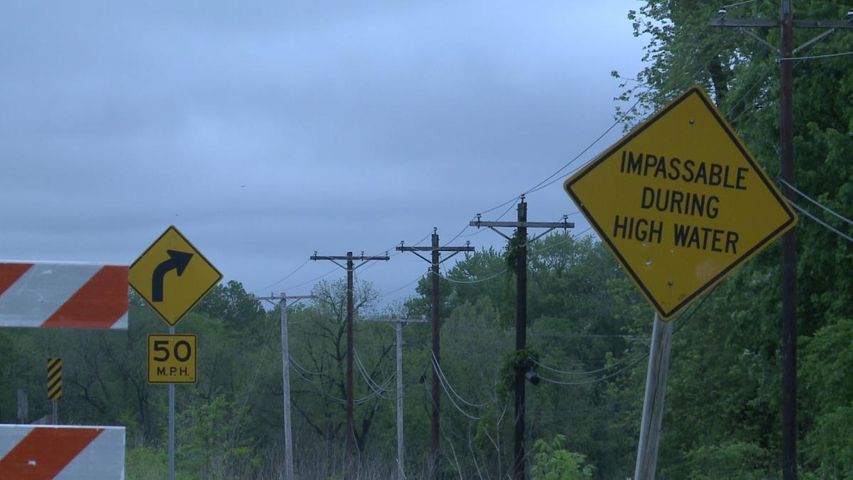 COLUMBIA - MoDOT and Boone County Public Works urged drivers Monday to stay off roads covered with any amount of water.

"Water can come through and actually take pieces of the road away--chunks of the road out--and you can't see that when there is water over the road so therefore drive through it and you may end up in a hole," Boone County Public Works road maintenance superintendent Bryan Boyce said.

MoDOT said the water started on the side of the road of Route E and made its to the center line. "If it's getting close to the edge of the road, we usually monitor that situation with guys out there constantly keeping an eye on it to see when it gets to that level so we can shut it down," Jim Marshall of MoDOT said.

Though MoDOT and Boone County Public Works have shut roads down, people are still attempting to cross the road because, MoDOT said, people aren't afraid of water.

"We've had people with incidents of them driving through and it stalling their cars out," Marshall said.

However, Boyce said flooding can be worse than a snowstorm.

"When you have a snowstorm, and the water starts to melt, you aren't getting it all at once like you did with the three-inch rain storm. You're getting all this water at once. It's washing debris, clogging pipes up, it's coming down all at once so it tends to cause more issues than, say, a couple inches of snow," Boyce said.

Both Boyce and Marshall said they don't know when the roads will reopen. People will have to wait until the water recedes.