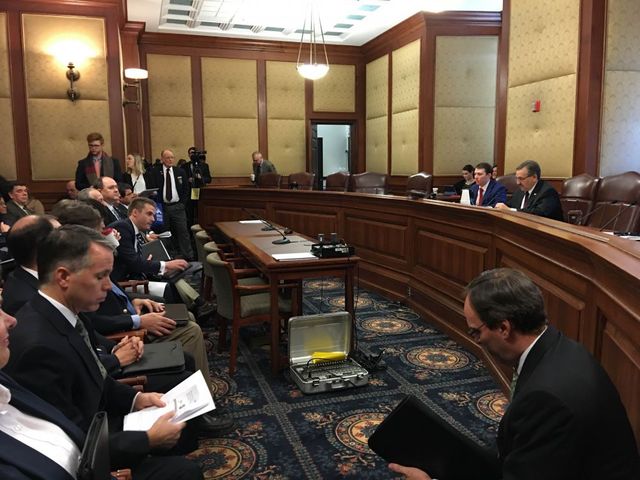 McKenna said Missouri has the 7th largest highway system in the nation, but the state ranks among the worst when considering revenue spent per mile. In that particular category, Missouri is ranked 47th.

Libla said the bill will bring long-term funding to the state's transportation system.

Various organizations came to this hearing to go on record and voice support for SB 623.

McKenna said MoDOT intends to operate more like a business, and he believes it is. He said the state needs to remain competitive against its surrounding states as those states have raised the rate of gas taxes. McKenna used Iowa and Nebraska as examples.

"We have to be cognizant of the fact that when these other states are raising, their investing at a rate that's greater than the rate in Missouri, and we have to be really careful that we don't get behind in terms of that investment because business notices," McKenna said.

When discussing the need for more funding, McKenna focused on the state's growing number of “critical-condition” bridges.

There are nearly 10,400 bridges in the state highway system and about 60 percent are older than their intended useful life of 50 years.

"It doesn't take a 500 year flood to close a bridge, it takes a MoDOT worker with a yellow helmet on," Libla said.

McKenna also discussed the federal FAST Act (Fixing America's Surface Transportation). The U.S. Senate passed and the president signed this into law in early-December. It is the first long-term transportation bill in over ten years.

McKenna said this act will provide the state with slightly more than $1 billion, which gets Missouri back to where it was about a decade ago.