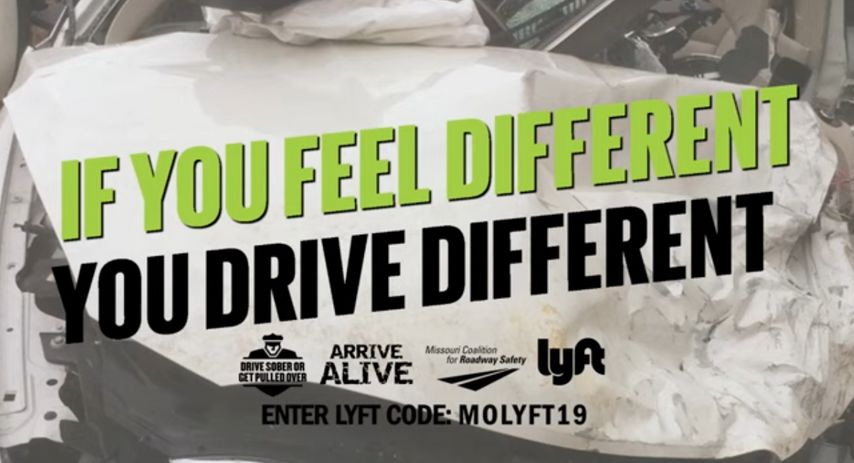 COLUMBIA - MoDOT is teaming up with a major player in the ride-share industry as part of this year's 'Drive Sober or Get Pulled Over' campaign.

Lyft will be offering discounted rides in Missouri for the duration of the campaign. It runs from Friday, Aug. 16 until Labor Day.

"This gives people an option to get a safe ride home and not have to worry about impaired driving," Lyft spokesperson Joseph Schlichter said.

According to MoDOT, 198 people were killed in crashes involving impaired drivers last year.

"Ten years ago in Missouri, impaired drivers accounted for about a third or so of fatalities," said Jon Nelson, chair of the Missouri Coalition for Roadway Safety. In 2018, only about one-fifth of deadly crashes were caused by impaired drivers, he said.

Drivers found guilty of driving impaired could face a wide array of punishments, according to a MoDOT news release.

"· If you cause a fatal crash while impaired, you can be charged with involuntary manslaughter – a felony resulting in up to seven years in prison, a $5,000 fine or both.

· Your license can be suspended for 90 days on your first conviction. You could be fined up to $500 and spend up to 6 months in jail.

· Any person guilty of a second or subsequent intoxication-related traffic offense will be required to install an ignition interlock device on his or her car before being able to drive legally again.

· Additionally, minors may be subject to a Minor in Possession citation resulting in license suspension for 90 days for a first offense. This is in addition to any suspension resulting from point assessment on an alcohol conviction.

· Insurance coverage may be difficult to find, and your rates will be significantly higher.

· There is the added embarrassment, humiliation and potential loss and consequence after informing family, friends and employers.

Drivers looking to take advantage of the Lyft discount can use the promo code MOLYFT19 through Labor Day to get $5 off a ride. It's only available one time per user.