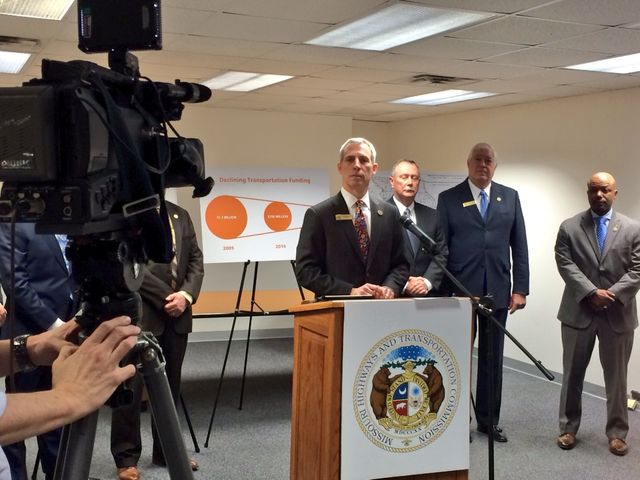 JEFFERSON CITY - The Missouri Department of Transportation is facing an ever-shrinking construction budget, and on Wednesday discussed plans to figure out how to deal with it.

The projected budget falls short of the $485 million the department says it needs to maintain statewide roads and bridges.

Despite the shrinking budget, MoDOT has a plan to make sure the money is spread out to necessary projects.

"Missouri's 325 System" calls for MoDOT to focus its declining resources on approximately 8,000 miles of the state's 34,000-mile highway system. That constitutes Missouri's primary roads and highways that connect cities across the state. The department will use the money to maintain the roads in a good working order, but it will not start any major projects such as interchange improvements or road widening.

"This is not going to be business as usual, this will be a historic moment for this department as we really have to decide where we are going to devote our resources,"  said chair of Missouri Highways and Transportation Commission Steve Miller. "What that means is that we will not be able to maintain the same service as we do today on roads that are primarily serving local traffic, not only in our rural areas, but also in our urban areas."

The remaining roads will be subjected to the state's supplementary system and will receive less maintenance, but MoDOT said it will do its best to fund projects on these roads with internal resources.

"We won't be doing resurfacing projects, bridge replacement projects on these supplemental rodes," MoDOT director Dave Nichols said. "We will be doing maintenance work, patching potholes, plowing the snow, striping the roads, we'll take care of the traffic signals, but to do a capital improvement projects to upgrade the system, we will not have the revenue to do that."

Some of the supplemental roads include significant urban routes such as Providence Road and Stadium Boulevard in Columbia, Route 179 and Missouri Boulevard in Jefferson City and Business 54 in Fulton.

"One example is the periodic asphalt overlays that have allowed us to have smoother roads and resulted in 85 percent good condition on our roads, we are simply not going to be able to do that on a supplementary system." said Miller.

The new plan differs from MoDOT's current focus on major and minor roads, which constitute 20 percent of the state's highway system and carry 80 of the traffic. The proposed plan wants every county to have at least one highway designated as a primary road.

MoDOT said the decline is a result of an accumulation of factors. With people driving more fuel efficient cars, fuel tax revenues are declining. The department gets funding from federal and state government sources but its primary funding comes from fuel taxes.

The shrinking revenue means less federal funding for the department, as MoDOT's budget will not be enough to match the federal funds in 2017, which provides a $4 to $1 investment.

"We have to live within the budget that the people have given us and we are going to do the best we can," said Miller. "There will be businesses affected, there will be individuals, if they don't like it, they either learn to live with it or they increase the investment on transportation."

MoDOT has not taken action on the "325 System" proposal and plans to discuss it with local officials before making any final decisions.

Despite attempts to raise the transportation sales tax in last summer's election, Missouri voters turned down a measure that would have funded more than 800 state projects.