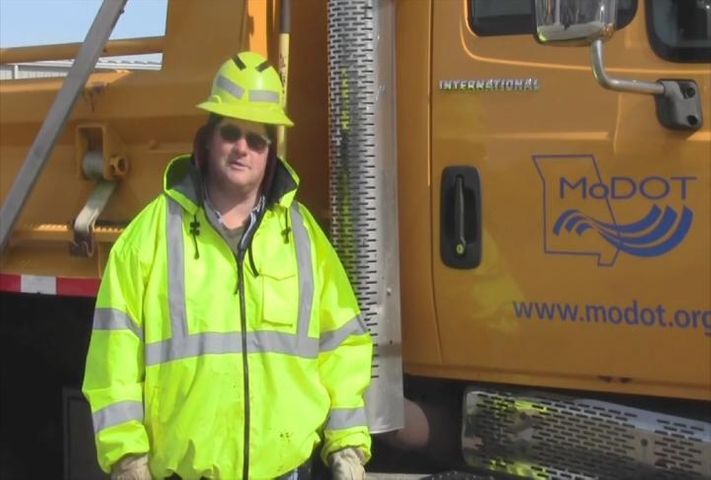 JEFFERSON CITY - A MoDOT worker involved in a work zone crash tells his story in a YouTube video as a warning against distracted driving during Work Zone Awareness Week.

Scott Campbell, Jefferson City Senior Maintenance Worker, said he was driving the last truck in a striping train on Route 50 when the crash happened in April 2014. A pickup truck driver was not paying attention to the trucks in the work zone. The driver was unable to slow down in time and hit the back of Campbell's truck.

"I knew I had a problem [when] I heard the screeching tires and was trying to find if it was in my lane or the other lane," Campbell said. "I just caught a glimpse, and I saw the smoke kind of in my mirror, and I knew it was in my lane, so I just kind of waited for the impact because I knew I wouldn't be able to get away from it."

Campbell said the truck's Truck Mounted Attenuator, or TMA, took most of the impact. While the pickup truck was totaled, the driver only had minor injuries. Campbell was not injured in the crash.

According to a statement from MoDOT, 53 people were killed and 3,347 people were injured in Missouri work zones between 2010 and 2014. Distracted driving is one of the top causes of these accidents. Campbell said in only five seconds, drivers going at highway speeds travel the length of a football field. He believes distracted driving has been on the rise, mostly due to smart phones.

"Pay attention, slow down and be aware so we can all arrive alive," Campbell said. "We all have family and friends we want to go home to."