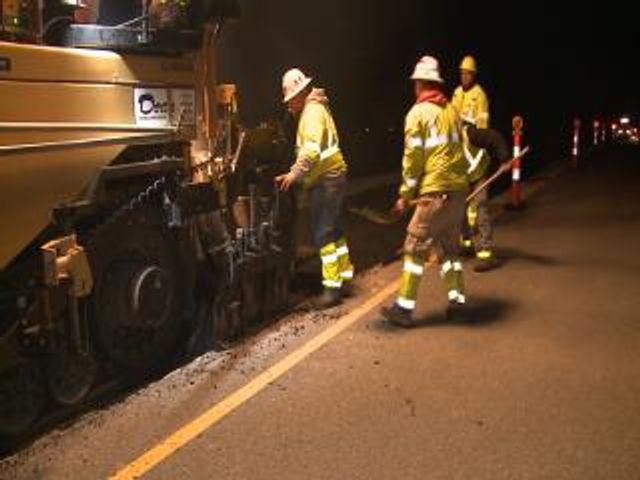 COLUMBIA - MoDOT and APAC crews finished laying new asphalt Thursday morning on the shoulders of the southbound bridge at Highway 63 and Stadium Boulevard.

Crews began work on the shoulder of the left-hand southbound lane at 7 p.m. Wednesday. The shoulders of the bridge were constructed in 2000, and after 14 years they could no longer withstand the traffic loads set by MoDOT.

Shane Viers, a senior construction inspector for MoDOT, said, "So, it was 14 years old and it's useful life was about up, and when we turned traffic over onto that shoulder it basically crumbled away."

The bridge rehabilitation project has ten bridges in its project plan, eight of which are in Columbia.

Viers said, crews will complete the first four bridges along Highway 63 before Memorial Day. These bridges include the north and southbound lanes at 63 and Stadium Boulevard, the northbound lane over Hominey Creek and Grindstone Creek.

Between Memorial Day and Fourth of July crews will work on both of the on and off ramps of route WW, and work will be completed on the two bridges at Broadway over Highway 63 from the Fourth of July to Labor Day.