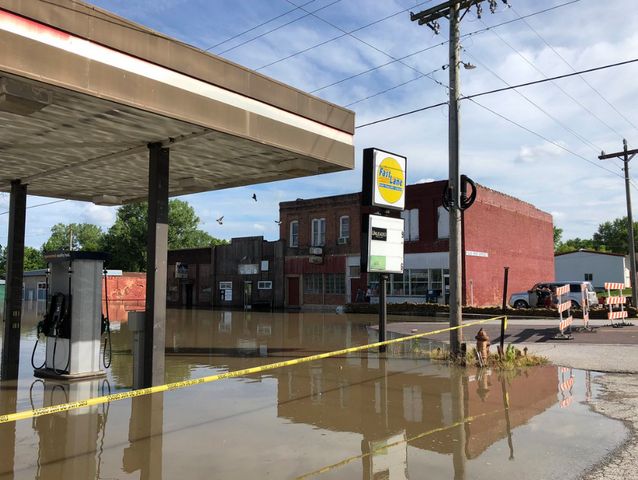 MOKANE - Some Mokane residents are calling the recent flooding the next "100 year flood." But, not all neighbors are sold on that title including city alderman Chad Booher.

"Since I moved into Mokane, which has been some 20 something years ago, they would talk about this flood that would come in about once every 100 years. But man-made stuff changed that, like levees and everything," he said. "So, maybe it is once every five years. Five year flood, maybe, now."

The water levels that are nearing records set in 1993 have forced the small town to come together to combat the flooding.

When the Mokane levee broke on Wednesday morning, it added to the already existent flooding.

The town spent most of Thursday sandbagging. The town focused on protecting the two fire stations in town and the post office.

Booher said the clean up process following the flood will present just as many problems as the flood itself. He said picking up all the trash the water has carried to different places will be a long process.

Booher said in '93, trash traveled to Mokane all the way from Jefferson City.

KOMU spoke with volunteers who expressed how thankful they were that the floods hit when they did.

"Thank God school is out," one mother said.

One of the concerns moving forward is the annual fair the town hosts on Labor Day weekend and whether the event will be able to happen. The banquet hall and baseball field, that are both featured in the fair, are currently under water.