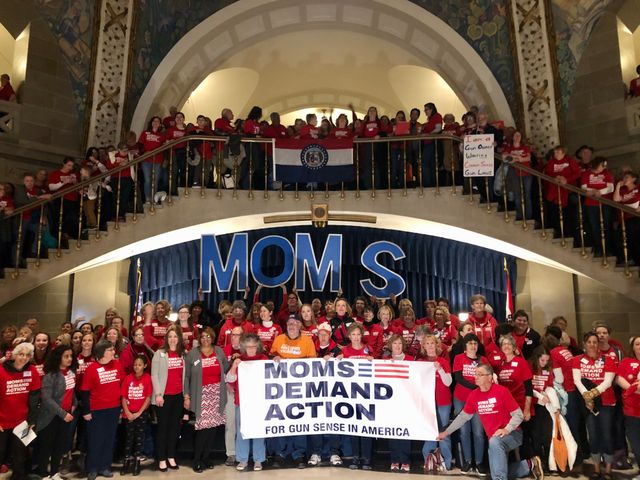 Members spoke with lawmakers throughout the day about what they call "common sense legislation." Speakers stressed the importance of House Bill 2131 and Senate Bill 563 - both of which, if passed by state law, would prohibit individuals from obtaining firearms due to domestic violence protection orders.

Catey Terry, local spokesperson for the Columbia chapter of MDA, said they think of their progress as a marathon, not a sprint.

"There's an overall sense of frustration with the lack of common sense gun legislation in this country and the inability of any body of politics to take positive action," Terry said. "This energizes moms and that's why we're here 500-strong to visit our legislators."

Terry said she's seen a change in recent years of lawmaker's perception of what they do and the message they are sending.

"When we originally came down here, we could see legislators in their office and they would not come out and speak to us," Terry said. "Now everyone is interested in hearing what we are saying, and I think part of that is because we advocate for common sense gun legislation."

Terry said that despite the receptivity that has increased as the group's numbers have, there's still a divide of opposing lawmakers with talking points of their own.

One of those lawmakers, Rep. Chuck Basye, R-Rocheport, doesn't agree with the bills as they stand now.

"I understand that there's a problem with gun violence and all of that," Basye said. "The people I work with a lot are afraid this could morph into something else."

Basye said there's a lot of factors to consider, like messy divorces, where a spouse could make an accusation that is ultimately untrue.

Basye said domestic violence is something he does sympathize with, as his wife still sturggles from a personal childhood experience of her own, but he doesn't think red flag laws are the answer to the problem.